The Divide will start in downtown Manton and head south and west towards the dirt roads that skirt the Manistee National Forest. The Divide standard event most roads are solid gravel roads with only a little sand and one slightly rougher downhill section dubbed the redneck roughneck. This ride is doable by any rider.

Those ramping up to The Divide+ and for our Pro-Elite race, will enjoy just a little two track in addition to the solid gravel roads.

The Divide Pro-Elite will do a double loop of the most challenging part of the course to add a bit more elevation and to challenge the stronger racers out there.

Longboard Racing!
On Sunday afternoon we will offer three longboard races:
The Divide LB will be one mile down into town from the West High Point. The course has total elevation drop of 151 feet over one mile with several turns and one small push to the final summit, from there you come ripping to the final turn into the finish.

The Divide+ LB is a 5K push with decent amounts of elevation change. We will have you drop into the event from the West High Point. 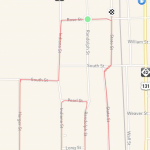 The Divide Slide/Trick Jam will be a free for all with riders showing their best stuff.

RSVP for The Divide - Gravel Race to add comments!