I usually work log hours Fri, Sat, & Sun. I'm getting back in shape and want to do regular road rides from Evanston Mon-Th. At 9am. Any established groups or interested parties let me know. Thanks.

why we ride (el comienzo)

its been approximately 5 years since i've had a vehicle at my disposal.
cars were my everything; i was a mechanic at a ford dealership... i built hot rods in my garage... for christ sake i was even in a rockabilly band that played songs about cars.
however all that quickly changed one night thanks to a bottle of vodka and some bad ideas. i pulled my ford ranger out into a busy intersection without stopping and got t-boned by an unsuspecting minivan driver.
clearly my fault.… Continue 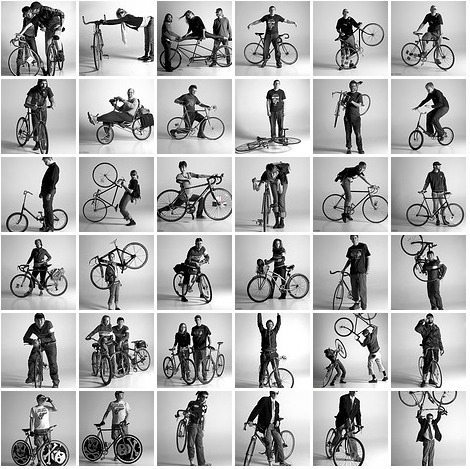 This is the the work of Chris Thomas a photographer from Kansas City.

For my similar yet different art project Bike salute I'd like to do something similar.

If you know of a studio/space where it can be done (I can rent the lights) please let me know. you can email me directly Dubi.Kaufmann @ bikeSalute.com

Sick of riding hurt, or worse yet, being sidelined by injuries? Well, your friendly P.T., Laura Cooper, is hanging out at the Chainlink with a little advice and some tips to help you ride without those nagging aches and pains. I am here to share a little knowledge and offer my two cents worth if you have any queries or questions. This first post is a little long, but my philosophy of treatment is not one dimensional. Future posts will be sleeker, like your dream road bike. Scroll down if… Continue