A bit torn up.

Riding LFP something over 10mph, nearing Diversey, chain dropped off during a hard downstroke. Threw balance chaotic, so I intentionally pulled bike down to control fall and get offsides. Elbow gouged through gravel, dripping blood, jogger women were urgently helping in SECONDS. I rinsed off nearby and aborted getting to the Ride of Silence, knowing shock would soon set in. Carefuly rode back home to wash cuts and bandage arm. Yes, I'm well prepared for such first-aid, and used to it, but I… Continue

CHAINLINK MEMBERS ONLY! Please pass this along. If we can get a total of ten interested buyers to commit to any of the following frames and forks within 24 hours, we can pass off these amazing prices:

Our safety record stays clean (barely), there were tons of new faces, a committee is formed and as a result the FBC gets some ass (again).

Seconds after hanging up my phone, hearing that he was only a few blocks away and about to join up with us, The Hazard called back to let me know he’d just been hit by a car. The look on the driver’s face was one of shock when 20 bicyclists flew into the parking lot two minutes later to check on him. Thankfully Martin escaped the event with some… Continue

with a little help from my friends... 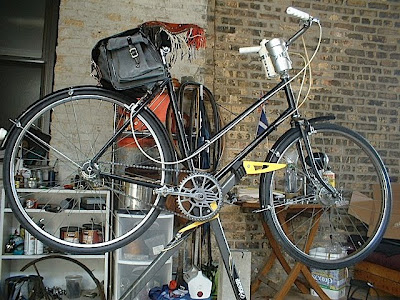 Interview with Leah from the Chainlink on VWYF

This week Vote With Your Feet talks with Leah Neaderthal,
founder of the Chainlink social networking website for cyclists
about the history of the site and her goals for its future.

Keep on walking, biking and transit-ing,

When people asked me what my plans were for Amsterdam, I replied earnestly that I was going to:

A.) Rent a bike
B.) Get higher than Jesus
C.) Cruise around town on said bike with local beer in hand and enjoy the sights.

Knowing that Amsterdam is a bike-oriented city, this seemed the perfect plan. What could be wrong with it? Seems to be a pretty laid-back relaxed place right?

Wrong. Upon leaving the train station with a slightly off-kilter, hungover… Continue

I broke a toe.

Saturday May 2nd, afternoon at Cricket Hill in Montrose Park for Kids-n-Kites (must be my tenth time at that event). Tripped sort of when cheap flip-flop folded under, felt it crackle and knew right away. First toe (after big), right foot, hues of purple, treatment well in hand. Feeling better a few days later, starting to be able to move it. Bottom line: I can't risk skating for a while, and am not sure about biking.

More on Those Potholes

The absurdly ridiculous potholes are bad enough to deal with. Even worse, if they are on a street without marked bicycle lanes, we are SOL in holding the city accountable.