It’s always fun to hear about a local racer succeeding at events in other states. It’s extra cool when one of our own podiums in another country. It’s sweeter still when she earns a medal at a national championship. This year, one such rider is Maria Larkin.

Those in the Chicago racing scene have come to know Larkin for her friendly demeanor, outgoing personality, and determination. She also has a penchant for riding at the sharp end of road and cyclocross races.

On January 11, Larkin travelled to her Native Ireland to put the hurt on her countrymen...a hurt very familiar to competitors in the Chicago Cyclocross Cup. 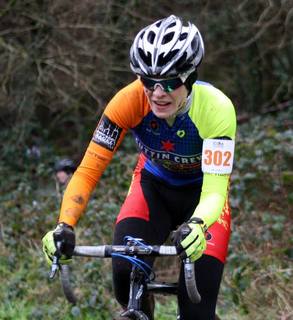 Now that she’s back and recovered, The Chainlink caught up with Larkin to hear about her experiences.

CL: What inspired you to compete in this event?

ML: Well it was always something that I have wanted to do, since I started racing cross. I wasn't sure when I would get the chance too, as it's a big trip, and I didn't want to just go over and show up, without having some confidence in my fitness and form. This past season though, I was feeling really good, I had improved my results considerably from the year before, and was feeling better at handling my bike and racing smart. We were also planning a trip home to visit my parents, who live on the west coast of Ireland. Travel at Christmas is always so expensive, so we took a look at travelling in January, and figured we could fit the race in too. I felt pretty confident that I could go and do well, so we decided to do it.

CL: What were some of the logistical challenges you faced in putting this race together?

ML: It was kind of a stress even getting the equipment together. I don't normally have a 'B' bike, but seeing as I was going all that way I should make sure that all our bases were covered. Thankfully everyone is extremely generous. I managed to borrow a similar sized bike to my own from (local racer) Andrea Devine, wheels from (Comrade Cycles Co-Owner) Bailey Newbrey, and a bike box from Johnny Sprockets. Thanks, Manuel! It actually ended to being free to fly the bikes, as we didn't check a bag, we couldn't believe it, we thought that was going to be a lot of extra money. Aer Lingus were so nice, no fees at all. Daphne Karagianis from Cuttin Crew was also a saint. She carted me around, picking up my stuff, driving us to the airport, lending us a bike box! A pretty good lady to have in your corner. 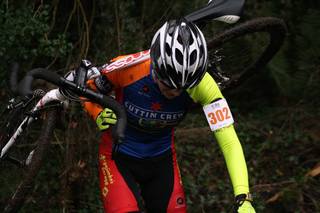 CL: Being a racer from the US, was registration difficult?

ML: The registration was pretty straight forward, they don't use bikereg, but it was a simple paypal set up. Pay money, fill in your details, and race. I did have to buy an international UCI license, which is more than the regular USAC one, but now I can use it for all the Elite races this next cx season, so it's an investment. I'm really excited to use it, feels kinda pro!

CL: What about mechanical support?

ML: Luckily I married a very competent bike mechanic, so I had top class race support. We practiced bike changes, something I had never done before, and he also got the two bikes set up so they were almost exactly the same. Which is a relief, I didn't even really notice the difference when I was racing. Doing the pit exchange was really fun too, my sister's boyfriend Cian assisted us too, so I had the full pit crew!

CL: Was jet lag an issue?

ML: I planned on arriving three-to-four days before, and luckily our flight got in at a reasonable time. I didn't feel too bad this time around, sometimes it can be worse than others. I felt pretty normal and rested by the time race day came around.

CL: What about training and nutrition?

ML: The day I got in, I did have to do some intervals to prep for the race, luckily I grew up on a farm, so there is plenty of space to go ride your cross bike around. It was very wet though, but good prep for the race conditions to come. I did my pre race efforts on the farm too, and then we headed up to Dublin the night before the race. I wasn't too fussy with nutrition, just plenty of healthy food, no fried stuff, and a whole load of oatmeal before the race, which is the same as what I would do at home.

ML: It was so hard to know. The racing scene in Ireland is pretty small, so I hoped I would have an advantage of having raced a lot, with lots of really strong women. I wasn't sure how I would do, but I was hoping to make it on the podium. I knew that (race winner Francine Meehan) would be really really good. She has a lot of experience, having done races in Belgium, and being extremely fit, and having multiple Olympic and world medals from Paralympic track and road racing. I was hoping I would just be able to stay with her as long as possible.

CL: Based on your experience, can you describe cyclocross in Ireland as it compares to races you've contested at the local, regional and national level here in the U.S.? Let’s start with the course itself.

ML: There was a lot of elevation, something we're not so used to here in Chicago but would see more of regionally. The whole course was set up along the side of a pretty steep hill. There were two run ups, one through a woods, which felt really euro cx. The whole course was really well laid out though, fun downhill off-camber turns, technical sections in the woods, a really really windy straightaway that was an energy sapper. I can easily say it was one of the hardest races I've ever done. It was exhausting! 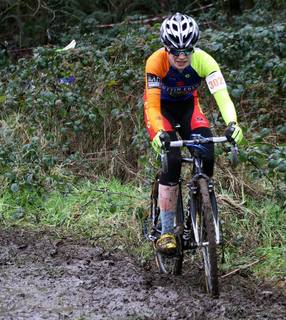 ML: The course was so thick with mud, something we don't get as often here in Chicago, there was really very little recovery to be had. I was really glad to have my 'B' bike lined up, as there was a real danger of having the mud clog up my drive train and ripping off the derailleur. I changed bikes every lap.

ML: There were twelve starters in the womens race, I think, and there was a good mix of racers. Some of the girls were just starting out racing, and some were obviously very experienced. The whole atmosphere was really great, and I felt really welcomed by everyone. A lot of people had read the interview I did with 'The Bike Comes First' a blog promoting the race, so it was really funny to have people see my kit and know that I was the one in from America. There were a lot of heckles...nice ones too!

CL: Can you describe how the race unfolded?

ML: Well it was an uphill start, onto the long straight away into the wind. Fran went straight to the front and started pushing the pace. I was slotted in 2 wheels behind her, and (Bronze medalist) Claire Oakley, another really talented rider, was right on her wheel. As we came up on top of the hill it was the three of us. I kept telling myself to just slot in, see how it goes, stay right here. I wanted to try and bide my time, see if I could stay the pace, and then make moves after a couple of laps. The straight away basically was the entire length of the course, and then into some woods, onto a trail. There were some steep uphill bumps that we had to negotiate, which both Claire and I fumbled a bit. Fran was smooth and kept the pace up, she basically just rode away from us after three quarters of a lap. Then it was a two-way battle between Claire and I. I felt good on the run ups, which Claire was struggling with a bit, and I felt I could use that to my advantage. Each time I hit the run up, I would go as fast as I could in order to drop Claire. Since Claire was selected for the Commonwealth Games mountain bike team last year, I knew she would be an excellent bike handler, and she could make up time on the technical parts.

Eventually I managed to pull away from Claire and settled in to 2nd place. I really tried to keep the pace up since you never know what could happen. Fran could blow up, or the mud would clog up her bike. The race was scheduled for 45 minutes, but we ended up racing for one hour and five minutes. I eventually was lapped by the masters racers. Fran was not, so she ended up doing a whole extra lap and probably finished the race at one hour and 15-20 minutes. I was completely toast by the end of it. Doing an extra 20 minutes at race pace is no joke, and my last lap time was pretty slow. I gave it everything I had, I had a two day cx hangover after!

CL: You mentioned that your husband, Kyle Hagerman, was your race mechanic. How much did having him there help you?

ML: Oh it helped a lot! I had someone I could trust working on my bikes, I knew that if anything went wrong he could take care of it. It was really a relief to have him in charge of all that stuff. That can add a lot of stress if something happens. I knew everything would be checked, and double checked, and just working.

He's also a very calm person, so he kept me from freaking out over this big race that I was doing. I also was worried about how well I would do, would I suck, etc., and he was always there to remind me that no matter what happened everyone would be proud of me, and that I certainly was not going to suck. He supported me the whole way through, training since last July, dealing with my bike after every race, cooking me delicious dinners. Racing can sometimes get you down, especially if it's not going well, so having an understanding person in your corner is really great.

CL: What are your 2015 goals? Any interest in returning and going for the win?

ML: Well I am taking a few weeks off now. Need to rest my legs, and my mind. Then starting again for road season. I plan on doing as many elite cross races as I can next year. That includes Trek CxC Cup, Jinglecross, and Gateway Cup. That'll be a real challenge, so I have a lot of improving and training to do before then. I will definitely be back (in Ireland) next year. Now that I know the competition, I can set real goals to improve. Fran will have some more determined competition next year!

All in all, it was a real honor to go race in Ireland, and I'm really flattered by how many people were pumped for me!