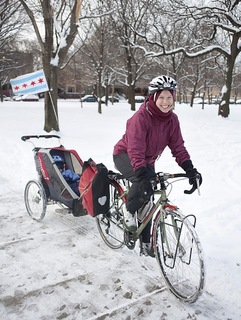 1) How/when did you get into cycling as a profession?

My family was car-free when I was growing up in Chicago in the 70’s and 80’s. Some of my earliest, fondest memories are of going on long walks with my dad and taking the #6 bus downtown for special trips with my mom. Alas, when I was in my mid-20’s, my teaching work required a lot of 3-5 mile trips during off peak hours. Relying on transit and walking was slow and frustrating and I considered buying a car. Thankfully, my boyfriend at the time was a bike commuter and friends with a woman who also rode who always dressed to the nines. They were the inspiration I needed.

On September 11, 1997, I bought a basic gray Trek mountain bike (this was the late 90's after all). I remember the first ride clearly: rolling into the sunset on Chicago Avenue, feeling so free and then surprised by how quickly I reached my destination. Chicago both shrunk and expanded that evening. A few months later, I found Critical Mass and dove in.  I spent all my time on projects related to the rides and transportation advocacy in general, and eventually landed a job as a planner for the regional transportation planning agency. Critical Mass changed the course of my professional life, and also gave me an amazing community of collaborators and friends, including my husband, Michael Burton.

One of my favorite projects is Bike Winter, which I helped get off the ground with other Critical Massers over ten years ago. We had noticed that the rides got smaller as the temps dropped. I also found that policy makers sometimes had a hard time seeing bicycling as a serious form of transportation due to “fair weather” cycling habits. Eager to reverse these trends, we schemed creative workshops, events (and stickers!) to equip and inspire people to stay in the saddle  year round.

One thing I remembered about my first attempt to ride year round was that my ears got so cold in the fall while my core overheated in winter. Other winter biking role models like Michael, John Edel, Jim Redd, Gareth Newfield, John Greenfield, Eric Anderson and T.C. O’Rourke tipped me off to the gear I needed. Remembering the help I had received when first starting off, I made a batch of fleece balaclavas to give away at our first Bike Winter workshop led by the inimitable Mr. Bike. We have kept up the tradition every year, thanks to the efforts of many other “elves,” especially Santa Willow.

Our hope was that year round biking would make it easier for more people to live car free. Ten years later, I am thrilled to have lost count of how many people have credited Bike Winter and our other promotion efforts for inspiring them to sell their car or, like me, deciding not to buy one in the first place. Stories like that keep me going. My dream is a Chicago that has more bike bells than car horns and more parks than parking lots.

Now that I have a child, the work feels even more urgent. Will Miguel be able to have the same independence I had as a kid, roaming the streets of Hyde Park with my friends? Traffic feels so much more intimidating today than it did a few decades ago.  I love that Kidical Mass is taking off in Chicago. It’s a great way for families to connect, share tips on biking with kids and advocate for better cycling facilities. We also strive to be a resource for families who want to be car-free or drive less. It does make my heart sing to ride with friends I met through Critical Mass ten years ago and our young children. Here’s to community and the next generation of transvelopedes!

2) How does your organization directly benefit cyclists?

Right now I work part time for the League of Illinois Bicyclists, focusing on Complete Streets and the need for more road projects to routinely accommodate cycling and walking.  So many roads have been designed primarily to move cars and trucks. But these roads are often the only way to access important destinations or get across barriers, such as rivers, highways and forest preserves. I like to joke: Why did the cyclist ride on the busy road? To get to her destination! LIB works to make Illinois roadways safer for us all.

I also serve as board president of Break the Gridlock, a local non-profit organization dedicated to supporting a vibrant network of grass roots advocates working to reduce dependency on the private automobile. BTG is an all-volunteer effort that evolved from Chicago's Critical Mass rides. While our name is usually not front and center, our energy can be found in the various projects we support, such as  Bike Winter, West Town Bikes, Kidical Mass, the Autoshow Shutdown, Massup.us, the World Naked Bike Ride, the Albany Home Zone and World Car Free Day. By taking on both whimsical and serious projects, we are making a dent in car-dependency.

Special plug: We are seeking volunteers for the May 22nd Urban Assault Ride, which benefits Break the Gridlock, The Chainlink and West Town Bikes.  Thanks!

3) Do you specialize in a certain type of cycling?

Yes--biking for all weather and all occasions. I like to help people address real and perceived barriers to cycling. This is not to say that I think everyone needs to be on bikes for all trips. But if you want to ride, there are ways to work around the issues of clothes, weather, cargo and kids.

4) What are your "must-have" items for cycling (this could be a tool, an accessory, a food, etc.)

Waterproof panniers, a positive attitude, and the confidence to take the lane when need be.  And degreasing soap, which I needed today after my chain uncharacteristically  fell off while I was biking home with my son.  (Did I mention a positive attitude?)

5) What do you see as the biggest area of opportunity in your niche market?

High gas prices traditionally spark increases in cycling. Our work is to help those new commuters stay in the saddle. If their bike does not fit, their seat is too low, their undershirt too cottony, their cargo capacity limited, we risk having them give up on cycling.

6) How do you think the cycling community has changed in the last year or two?

Wow--it just seems to keep growing exponentially in terms of people who "just ride" as well as those who are taking the lead on advocacy and promotion. The Chainlink has helped a lot with this. Projects like Dottie's Let's Go Ride a Bike and Martha's Bike Fancy are also getting more women to ride through the power of example and community building. My hope is that the bike community keeps growing in numbers and diversity so that we can be a resource to anyone, anywhere who seeks help getting into the saddle.

7) If you could go on a bike ride with anyone (living or dead), who would it be?

I would love to ride around the region with William Cronon, author of Nature's Metropolis: Chicago and the Great West. Reading that book after college was almost as transformational as becoming a cyclist.