What's the Best Bike for a Zombie Apocalypse?

A few months back, the Chicago cycling scene’s Internet was temporarily “broken,” thanks to a timely question posed by Manuel Tenorio, Owner of Johnny Sprockets bike shops. Typical year-end chatter centering around cyclocross tubulars, winter training plans and lobster gloves had to be temporarily put on hold while bike geeks poured their collective mental energies toward the following:

“Just had a conversation about the best bicycles for the apocalypse...What would you pick?”

Common answers ranged from fat bikes (ideal for nuclear winters and sandy wastelands) to touring bikes (great for hauling ammo and Twinkies) to single speeds (simpler and less likely to break down whilst being chased by undead hordes).

Some made suggestions by posting cool pictures like this, this, this, and... ummmm...this.

Despite the wide range of opinions, many generally agreed it’s important to steer clear of cutting edge, proprietary technology in favor of time-tested stuff that can be fixed along a lost highway, as well as rebuilt using parts readily made available by raiding an abandoned Walmart.

In other words, an apocalypse bike needs to be the following:

The best part of the discussion was that Tenorio actually BUILT his vision of an apocalypse bike and has been using it as his daily driver for several months.

Now that he’s had some saddle time, The Chainlink caught up with Tenorio see how the apocalypse bike project is coming along.

CL: First off, what inspired you to ponder the bike best suited to survive an apocalypse? Is this something you are planning/preparing for? Also, are we strictly talking the zombie type or a more generic end of days?

MT: The catalyst for the apocalypse bike was actually a customer coming into the store to look around and daydream. We started talking and I got curious as to which bike he would get if he could get anything he wanted. I asked him, “If it was the end of the world and he could pick any bike in the store, which bike would he get?” For him it was easy. He picked the lightest fastest bike in the store. If it was the end he wanted to have as much fun on the bike as possible before the zombies, virus, solar flare, or whatever apocalypse you prefer, got him. The conversation went from there to what if you had to survive? His choice of bike changed drastically. We were just having fun with the idea. 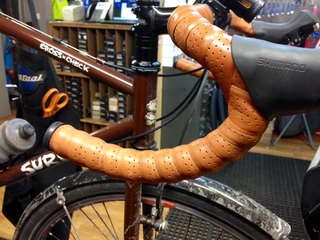 CL: Prior to posing the question on social media, what did you consider the vital attributes of an apocalypse-worthy bike?

MT: Initially cargo was the most important aspect for me. Hauling gear and the capability to traverse rough and varied terrain. I considered fat bikes, the Surly Long Haul Trucker, the Specialized Awol, the Surly Ogre. Really heavy duty bikes. CL: What new ideas did you learn from the ensuing discussion? How much did it reshape your ideas about what an apocalypse bike should be?

MT: What I learned from the post is that a lot of people wanted to have fun with their bike. If it was the end of the world they wanted to go out in a blaze of glory. I thought about and it made sense to an extent. Well, maybe because I was taking the question way too seriously. Quality of life. Should it matter if you're in a post apocalyptic situation? Is just surviving enough to keep you sane and keep you moving? Why not have a little fun while you're at it? That didn't change the bike frame that I chose but it did affect the parts I chose to built it.

CL: Lets discuss the bike you wound up building. What about your selection of frame, components, accessories, etc. uphold your ideals of an apocalypse bike?

MT: Alright. But keep in mind that it is still a work in progress. Mistakes were made and will be corrected. I chose the Surly Cross Check frame and still stick by that decision. The Cross Check is a very versatile frame. It has the capability to take front and rear racks for cargo, the frame clearance to run big tires, the ability to be set up as a multi-speed or single speed bike thanks to horizontal drop outs, and can be set up with parts that are found in any bike shop or department store in the country. That's why I didn't use a disc brake frame. Disc brake parts tend to be very specific to the brake and not readily available at all bike shops. I used a heavy duty touring wheel build for durability, wide puncture resistant tires for traction and reliability, and a steel rear rack for strength and serviceability.

CL: After riding it for a few months (albeit in non-apocalyptic conditions) what are your impressions so far? Anything that you are looking to tweak?

MT: Like I said, mistakes were made. Part of the reason I chose the Cross Check over more rugged options is that while it is a very versatile and capable bike it is also very zippy and fun. With that in mind i decided to build it with new Shimano 105 11-speed shifters and complete drivetrain. The problem with that is that the shifters are not designed to work in sub freezing temperatures so my shifters have repeatedly failed to work while riding through the really cold days this winter. I will be changing the integrated shifters to bar end shifters, adding a front rack for extra cargo capability...and maybe a handlebar mounted crossbow. You know, just in case! It's a work in progress so the bike will keep evolving as I keep running into new challenges. 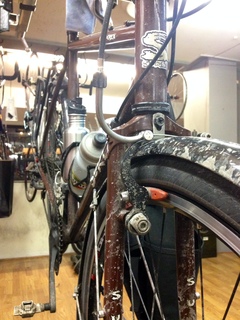 CL: Since the apocalypse is a ways off (we hope), how does a properly-built apocalypse bike stand up to normal, every-day riding duty? Is this something a well-prepared individual can get some good use out of before the zombies come?

MT: The bike is well suited for daily use. The streets of Chicago aren't exactly in the greatest condition so having a bike that can take the daily abuse is great. The best thing though is that I'm riding a bike even more now that I have more cargo capability than just my backpack. I'm using my car even less. I'm already several pounds lighter than I usually am in the winter which hopefully will make it even easier to escape the zombie horde. For daily use you might want to leave the crossbow off though, people freak out over stuff like that! I'm also going to start doing some self supported bike camping so I can get even more use out of my apocalypse bike. There are campsites not too far out of Chicago that'll make for some good overnight or weekend trips. Mostly I just love the bike and will use any excuse to ride it. Apocalypse or not, I'm really happy with my Cross Check. We’d love to hear what bike you’d choose for the impending apocalypse. Please share your thoughts in the comments below!

Brett Ratner (brett@thechainlink.org) began commuting by bike in 2005. Shortly thereafter, his interest in cycling expanded to century rides, bike camping and trail riding. The competition bug bit in 2012 and nowadays he races cyclocross, track, mountain bikes, criteriums and gravel for Half Acre Cycling and The Bonebell. His goals for 2015 are to complete the Lumberjack 100 mountain bike race as well as a 600 kilometer brevet.

The steel Bianchi Volpe is similar, but lighter and quicker, than the Surly Cross Check. But both the Cross Check as pictured, and the Volpe as standardly equipped, share the same Achilles Heel in a apocalypse. The Shimano STI shifters/brakes, also known as brifters. I have had STI cables break inside the hoods twice in my experience. These otherwise slick and enjoyable shifter/break devices can get seriously jammed. Even the bike shop has to work hard to get the broken cable tip out, before installing a new cable. Not something one would want to do with zombies bearing down, while stuck on the smallest cog. The Surly, equipped as most are commonly delivered, with bar-end shifters, would bet a better choice as a survival bike. Easier to change the cable on the road. Better yet, good old down tube shifters, with shorter cables.

Obviously, The Chainlink dot org is my one-stop destination for credible, zombie-related prose, but What about the bombproof 5-speed chicago-made schwinns?