What Kind of Vintage Cannondale is This?

Hi all - I unfortunately have to sell my Cannondale road bike, but am not actually sure about the details of it too much. I was hoping if I posted a few photos of it, I might learn more about it. Any info you have is greatly appreciated!

Something from 1987 or 1988 based on the lettering. Try http://www.vintagecannondale.com

Permalink Reply by Louie Louie on March 19, 2015 at 1:46pm
It looks like a touring model because of the eyelets. The fork is not original, you should find out why it was replaced.

Thanks for that info! Unfortunately, I know where the fork is; it's probably somewhere on the side of the road in Indiana, never to be seen again. Long story.

It would be a lot more helpful if you were to post a photo of the drive side so folks could have a chance of identifying the components of the drivetrain that are in view.  A non-driveside photo is like trying to ID a car by looking at its roof.  Photos of the brakes and closeups of the front crankset w/ derailleur and the rear cogset w/ derailleur would help a lot.   Even if we couldn't positvely ID the model, it would give us a good idea of what price level the bike was and what it is worth now.

Photos of the headbadge, and any stickers or markings on the frame (such as tubing type), hubs and  ims would be a huge help as well narrowing down a model, and indicating it's resale value.

Serial numbers are almost useless as a lot of factories don't even keep a record of their own serial numbers, their meanings, or when they were used.  They will often change their formulas and reuse serial numbers again over time due to the almost total lack of recordkeeping.  It's not like a VIN number on a car that actually has a universal code built into it.

Not sure if those are XT thumbshifters being used as downshifters, if so that's pretty cool!

I think we have a winner.

Replacement econochrome 27" fork, and the addition of some sort of paddle stem-shifters for the DT shifters. Are they even 6-speed SIS compatible -or friction now?  Would have to test-ride to see if indexing is correct or fully ID the shifter and look it up.  I don't think they are an "improvement" or an upgrade other than being closer to the rider.   The rear wheel looks like an econo nutted-axle replacement too, hopefully it's the right type, OLD, and number of cogs.  Front QR skewer is in backwards.

Lowest-end Cannondale on the roster.  MSRP of $450 in 1987.  I wouldn't say this bike is worth even $200 in an unaltered state and in perfect mechanical condition being recently tuned when sold at peak spring-fever CL time. This example would go for less.  But better photos, a full listing of components, model, whatever from the catalog (maybe even a screenshot) would always help a sale.

That does look about right; thanks! There are a couple modifications on this one (pictures below), but given that if it's far from perfect and doesn't even have the original fork anymore, I guess I won't expect more than $50 or $75 for it, if I'm lucky.

I appreciate the help! 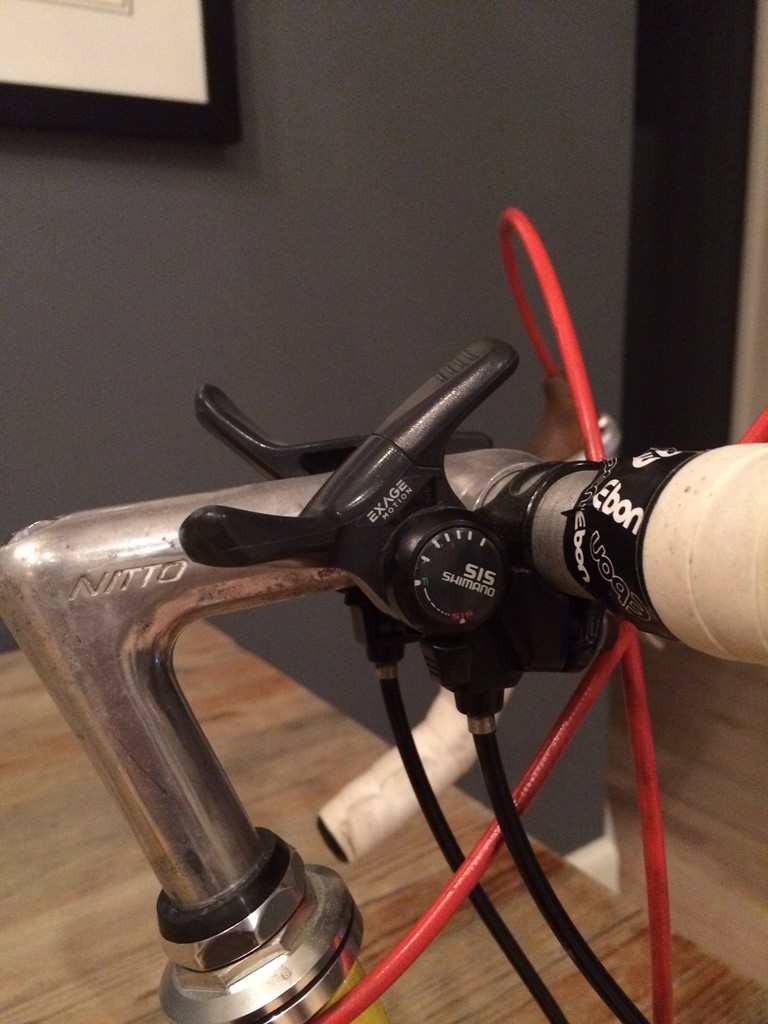 I think you should be able to easily ask $100+ for it soon.  When it gets warmer in a couple of weeks I bet you could get nearly $125-150 for it if you cleaned it up really nice, took good photos, and wrote a little bit about its history and what is on it for components from the brochure that Gopher Biker found.

Also, from that last photo it seems like the rear freewheel was upgraded to 7-speed (can't tell if it is a Cassette or still one of those rare 7-speed freewheel) and the shifters/derailleurs to Exage 400 7-speed which is actually a decent upgrade over what came on this bike.  Think Alivio-ish level  From the other photo I couldn't tell what was going on at the bars.  Those are actual MTB/Hybrid trigger-shifters and are/were fairly decent components although non-standard to be mounted like that on drop bars.  If they work well, they are sort of a neat retro-CX hack.

Also, it looks like the headset was also upgraded to an Origin8 sealed-bearing unit.  Hard to tell but that's what it looks like.  That's a decent upgrade.  It must have been done at the same time as the fork, as it needed a little more stack height, which may been why the fork was changed. With better photos I am liking this bike more and more.  I wish I could see a better photo of the fork itself. It might not be as cheapo as I first guessed.  It might actually be a nicer fork than an econo model.   Hard to tell in a photo like that.  Any writing on the chrome anywhere, near the dropouts?  At the crown?

Make sure the seatpost is not stuck in the frame and then list that as a feature.  This is an issue on older aluminum framed bikes like this, so one that isn't stuck will get more interest from buyers.

Thanks for all this info. I don't have the bike in front of me, but I can tell you what I know. The fork was bent in an accident, so we had to replace it, which is also why the headset was switched out, as you guessed. The fork itself is an Origin8 classic chrome steel 27" 300mm, so I think that might count as the "econo" model. If you'd like, I'm happy to provide more pictures tonight if you'd like; just let me know what you'd like to see!

And I appreciate the advice on pricing. I'll try not to sell myself short knowing what I know now with everyone's input.

Anybody have problems with aluminum frames this old which have been well used?  Aluminum alloys, especially older ones, are notorious for cracking and then failure.