Think of this as a Missed Connection.

You blew the red light east bound on Lawrence at Damen at 5:26 pm this evening.

There was enough time for the biker in front of me to make it half way into the intersection, northbound on Damen, before you came whizzing past my front wheel.

I yelled "You're an idiot!" at your big haired chick, self, and you looked back at me. I meant it!

I woulda testified for any of the cars, that managed to not kill you, if they had.

Witness bad behavior during your commute? Feel free to post. Maybe that lovely human can read it and think they are famous. Maybe you can also inspire the whole generation of kids to shower but we can start with small things.

KG: You are absolutely correct to point out as you did "For most of humanity's existence, having everything within walking distance was pretty much a required part of life." Fortunately for humanity, the industrial revolution (and capitalism) then came along, giving rise to the doubling of life expectancy globally, and even more to my own interests, to cycling. We're not going back to the plight of humanity before that, and the continued improvement in MV safety will continue as well.

Autos came on long after the industrial revolution and have caused much death and destruction since then. Same with jets. For the past half-century, interests have been aware of issues surrounding climate change and use of their technology and have done nothing, or worse yet covered it up.

KG:  And we can replicate this progress for cycling too instead of trying to impair that for cars and all sorts of transit modes.

So there needs to be another industrial revolution to make up for the inadequacies of autos?

KG: As is discussed elsewhere with respect Blue Line pedestrian crossing accidents, the solution isn't to ban the 'el here in Chicago.

Agreed. However, the argument is not that the 'el should be banned. Instead, it is that transporting 3 million Chicagoans by rail, bike, and other sustainable transit systems would produce an exponential reduction over autos in transit-related death. Transform the majority of two-way and one-way city streets into
split protected bike-car lanes by reducing car parking by 50%
(one side only), limiting car traffic to one direction only, and
introducing barriers ("protected lane") between cars and bikes.

Implement this on 4/5 city streets. 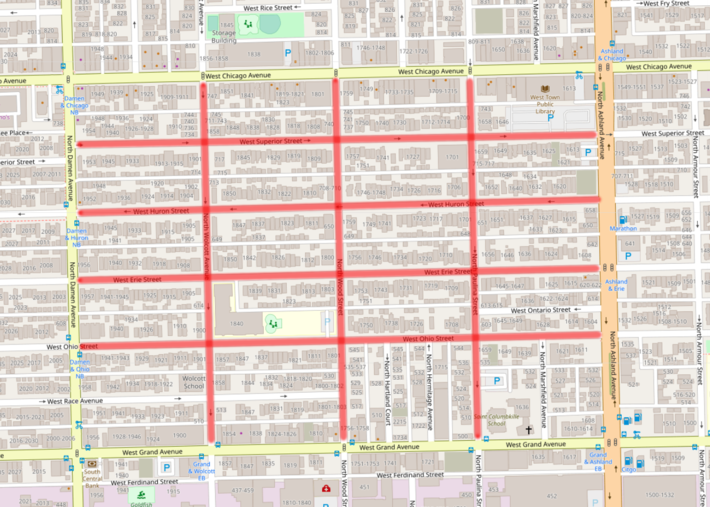 Reduce speeds to 5-15mph in these sections.

At all intersections, cars must yield to bikes.

Bikes are not expected to stop at intersections, only reduce speed.

If there are complaints regarding loss of parking space, buying smaller cars, SUVs, trucks, etc. will reduce the need for parking space.

Time crossing such that "all bikes cross at once". That is, e.g., on Grand Ave, three red lights (with crossing guards) come on at once.

You: one of the all-too-regular Lincoln Ave. bike riders who weaves around the crossing guard stopping traffic by my kid's school at Lincoln & Cornelia. I am compelled to say something as this morning I couldn't help but notice your cluelessness extended to actually giving her a smile and a wave while you ignored her and the huge stop sign she was holding up.

Maybe you've confused her smiling at you in the past with how she regularly shakes her head in disbelief at what a boor you and other terribly behaved cyclists are. But just in case anyone else here is unclear on the concept, when a school crossing guard is stopping traffic to allow kids and families to cross the street, this applies to cyclists as well. This makes us look terrible as a demographic.

I agree. The same thing applies (IMO) when there are cars waiting at a red light and a cyclist goes right on through. What must they think of us?

yes, but that isn't a reason to justify lacking in safe accommodations. I hear this pro-car argument all the time - oh, cyclists are law breakers. We are more likely to break the law to keep ourselves safe especially if we lack safe accommodations and protected bike lanes. OTH, motorists break laws out of impatience and distraction. And with so much of the population driving SUVs now and using their phones, I'm far more worried about them then one cyclist that blew a red (especially if they did it when the intersection was clear). p.s. We deserve safe accommodations NO MATTER WHAT. I would like a world where parents can ride and walk with their kids to school without worrying about dangerous speeding cars. This morning a few of the cyclists in the DC area had their kids brought to tears because of trucks and motorists speeding and breaking the 3-feet rule.
footnote: I follow the laws 90% of the time and reserve the rest to keep me safe.

In this case, cyclists have actually been given bike lanes. There is absolutely no justifiable concerned-for-one's-safety reason for a cyclist to ever ignore a school crossing guard. You are supposed to stop, period.

Obviously cars are the bigger concern - it's why the crossing guard is there in the first place - but this is nevertheless unsafe and bad for community relations behavior for cyclists. This all gets back to the larger issue - if we want to be treated as legitimate road users, we have to respect the most vulnerable other users. In this case, beyond the kids/parents it's also the poor crossing guard standing in a crosswalk in a neon vest holding a stop sign.

^^^^this.  It is 100% possible to believe the City (and the country) lacks acceptable bicycle infrastructure and accommodations, get upset that drivers (and the general public) use cyclists' bad behavior to in part justify not making concessions on those points, BUT STILL get upset that cyclists do things like blow past a crossing guard in the middle of an intersection with a stop sign while kids are crossing.

Agreed, there's no excuse for cutting through a crossing like that and putting pedestrians in harm's way. I was referring to a bigger picture comment.

Carter O'Brien is absolutely right, not only regarding the crossing guard situation but likewise in the broader context of which those rules are a part.