Stolen Bike Registry - do this when your bike gets stolen

"With all the stolen bike posts lately (and no one thinking "I wonder if there's something under Useful Links for this."), I think it's well past time to make a sticky about the Stolen Bike Registry"

Will, would you be so kind as to encourage the victims to file reports at the Chicago Stolen Bike Registry (stolenbike.org) so they have a beter chance of getting  them back?

There were SIX bikes stolen from the garage in my condo building near Ashland and Diversey late 8/18 or early 8/19. Some of the bikes were locked, some not. Among them was my Tangerine orange 1997 Cannondale M300 LE mountain bike with Swobo saddle and Felt seatpost, which I purchased to replace the Swobo that was stolen from the same location a little over two months ago.

When my Swobo was stolen, evidence pointed to a homeless person who just wandered into the open garage. Yesterday was likely a more organized theft, probably more than one person trolling the alley in a van or box truck, looking for opportunities.

They filed one of them yesterday, but somewhat oddly, only one, and not even their most expensive one. I'll encourage them to file CSBR reports on all the bikes.

My 2007 Specialized Sequoia was stolen last night by theives who sawed the fence it was attached to in the Noble Square area.  I would LOVE to goto Swap o Rama tomorrow to check it out, but I can't get off work.  It looks like this bike below:

It so sad reading the above postings!!!  Unfortunately my bike was also stolen this past Saturday night, Sunday morning.  My family was bringing my son to college when the thief struck....my son may have left the garage door unlocked.  It happened in Oak Park, near Madison and Ridgeland.  The bike is a dark blue, 19" 1997 Trek.  A lot of love and upgrades have gone into making the bike perfect for the commuting I do to and from work (Hyde Park).  There is a black rack in the back, pedal straps, raised handle bars, a new rear wheel to withstand the potholes...I would greatly appreciate any information that would help me retrieve the bike!!!  It will be hard to find a bike that is easy on my back and bottom!!!

My 2007 Specialized Sequoia was stolen last night by theives who sawed the fence it was attached to in the Noble Square area.  I would LOVE to goto Swap o Rama tomorrow to check it out, but I can't get off work.  It looks like this bike below:

Rear wheel stolen from my son's bike while parked today at North Side College Prep.  This marks the third theft we've had (as a family) from that location, two bikes and this wheel.   It's a generic black 700C semi deep V type rim, no-name bolt on hub, flipflop with both a SS FW and fixed cog mounted, with a Gatorskin 23mm tire.

Though there are security and video cameras at the school they apparently do nothing.  Son's meeting after school with the vice principal was not productive.

Poor kid.  He's now had two bikes and two wheels stolen from him, three incidents in the last eighteen months.  Some due to carelessness (first bike, a sweet Miyata, stolen from a garage during a party that got out of hand) but from the bike rack at school that's supposedly being watched?

Anyone who sees a wheel matching the above please PM me!  Otherwise I'll be looking for a replacement.

Al. I have a set of alex rims to no name hubs that were a new take off of a '13 spec langster, black rims, spokes and hubs, flip flop with a 16 tooth freewheel and a 16 tooth cog, spec tires and tubes I will sell for $125

my bike was stolen saturday night (9/7) / sunday morning. feeling rather pessimistic that i'll find it considering it may have easily sold at the swap-o-rama sunday afternoon. my girlfriends bike was locked to mine, my bike was locked to a bike rack at north & wood in front of the northwood cleaners, just north of that intersection. yes, both of our bikes were stolen. we left them overnight. last saw them around 10pm saturday night. we returned that next day, but not until about 4:30pm. no bikes, no locks. i filed a report with chicago.stolenbike, but haven't filed one with the police. i don't have the serial number of the bike. it was a 58cm chrome motobecane jury. no markings on the frame, but there was a small dent in the middle of the upside of the top tube. i just replaced the saddle pictured in the photo below with a black brooks saddle. the back deep v rim was wrapped with a gator skin tire. again, the frame is chrome, i realize it appears white in the photo, and sadly i have no other photos of it. the stem is white however. 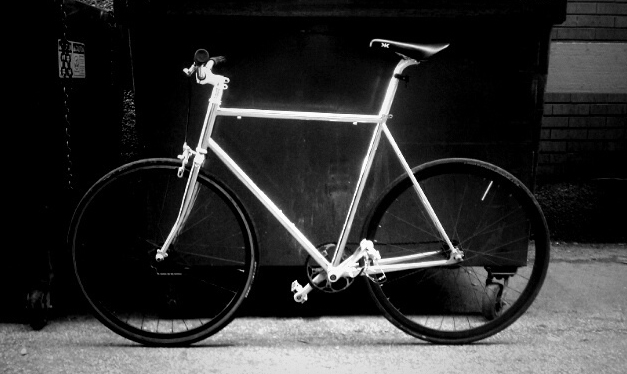 Sorry about your bikes. A police report can help in a recovery situation even if you don't have record of the serial number. Be sure to file a report ASAP. The best way to get through and get it done is  phone late at night; you don't need the report itself but definitely note the number. If the person taking the report says you can't file one without a serial number, just try again until you get someone else.

Take a ride this afternoon.  Great sunny day for a ride!

Unexpected beautiful week and a few more to come!  Get out and ride!!

Try http://www.chicagopolice.org then choose "On-line Services" then "Bicycle Registration" and you will have registered your bicycle.  When stolen they can access the information.

Problem:  The site is old, the data is stale, and they probably don't have the manpower to do much about it.

My friends bike was stolen out of my garage on 2/28 during the day. It is a red Giant Boulder. The picture attached is of a similar bike, just bigger. It has a rear mounted rack and goes by the name "Big Red". Already posted on the stolen bike registry and am scouring craigslist. Please PM me if you see anything. Stolen from garage at Damen and Chicago.