Starting the Mayor on the Right Foot

The Active Transportation Alliance sent out to all members a form letter, already composed and addressed, to Mayor Lori Lightfoot...all it needs is your signature.  Topics include:

•  Chicago River Trail:  a continuous system on the North, Central, and Southwest Sides

I guess ATA thinks its members are a bunch of illiterate morons who can't parse a sentence.  As a long-time Chicago cyclist, none of these are MY priorities...are they yours?   I suggest you delete the lengthy prepared text, and write your own thoughts.  Some ideas I'd suggest mentioning:

1.  Just like Governor Pritzker who wants to double the Illinois gas tax, double the Chicago city gas tax too...gas is now selling at a ridiculously low price, when adjusted for inflation and compared with past periods.  It is a very opportune time to take a bite of this sugar-plum, improve City finances, relieve Global Warming, and reduce congestion.  Refer to Bill Nye, The Science Guy.

2.  Name a Cycling Czar of Chicago who works 24/7 to make biking in Chicago safer and more popular.

3.  With the Cycling Czar, personally review EVERY cyclist's death in Chicago and the disposition of each case:  determining that such an accident will never happen again

4.  Survey usage of existing Protected Bike Lanes and consider dismantling those that do not attract at least 50 cyclists/hour during rush periods, and replacing them with paint.

5.  Implement Congestion Pricing in downtown Chicago similar to that being considered by several other major US cities.

I guess I'm not sure how you could objectively conclude the efficiency would be the same between an Express Bus and an extended Brown Line. The express bus would not carry as many people, would require an additional transfer, additional service(and therefore an additional point of potential failure of service), and an additional wait as opposed to a direct connection between the two train lines. The direct connection, once complete, would be permanent. An express bus, by comparison, would only exist as long as somebody wanted it to, and could easily be cut due to budgetary reasons, whether the fault of the route itself or not.

The Lawrence Loop Express Bus could be started next week, digging a subway underground (the only way not to tear apart neighborhoods) could take many years.  If there wasn't enough room on the buses, add more busses.

If it were used, why would somebody NOT want it?

Given that there's no evidence that would be more efficient (or even as efficient) as an extension of the Brown Line, it's easy to conclude that it won't be used, and/or that somebody would not want it.

If nobody wanted it then the Express Bus should be continued.  If the rail extension would be built and nobody wanted to use it that would be a waste of a lot of money.

Build the cheapest first to see what the demand would be.  Find out what's needed before you spend a lot of money and disturb the neighborhood on this project.

I agree with having a Bike Czar! That would be amazing! Unlike you I'd want the bike czar to get straight to work on building MORE physically protected lanes AND oversee that they are regularly cleaned and maintained. I don't think a lack of maintenance means we need to do away with protected lanes. If a lack of maintenance was the basis for getting rid of transit related things, we'd see Metra scrapped....

It's really hard to implement 4 when we don't even exactly know why folks aren't riding. Perhaps it's the lack of physical protection, lack of safe places to lock bikes, lack of an intuitive and low stress NETWORK, etc.


Raise the gas tax in Chicago to help fund transit and bike lane infrastructure.
Implement congestion pricing and help fund technology and infrastructure to speed up the buses
Create a Rogers Park-Hyde Park-South Shore express bus
Pressure Springfield to allow camera enforcement for bus only lanes AND bus stops. After the third violation of parking or driving in a bus-only lane or at a bus stop the person will lose their license for a year.

On a statewide level: mandate IDOT decrease VMT across the state and hold them accountable to that.

These are just ideas off the top of my head as I wait for a client to show at work.

Agree with more protected bike lanes, not less. Great comment about maintenance. A huge part of that is also enforcement. If there's a way for a car to squeeze in one, they will do it.

I am hoping the new mayor will keep to her word on bringing more services and infrastructure to the areas that need it most - the South and West sides of the city. Chicago can be an amazing place for riding a bike, let's make it that way for everyone. :-) 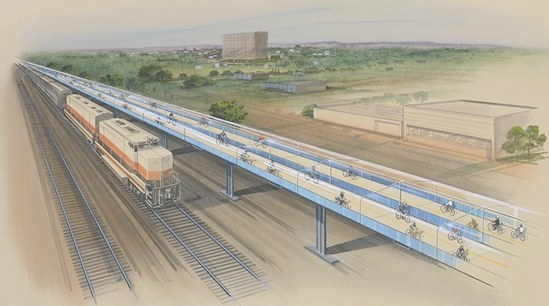 Get Lightfoot on the right foot :)

Wet dreams are made of these, who am I to disagree.

Will there continue to be a Mayor's Bicycle Advisory Council under the new mayor?

The next meeting is scheduled for June 6th.

Both Luann Hamilton and Rebekah Scheinfeld are leaving. Who will chair the meeting? Will there be a meeting?

Whatever you come up with, I think Mayor Lightfoot would be wise to pay attention to what's going on in NYC: https://www.nytimes.com/2019/07/03/nyregion/nyc-bicycling-deaths.html

It seems a combination of more bike riders and an increase in truck traffic (more Amazon deliveries?) has resulted in a toxic stew, despite Mayor DiBlasio's Vision Zero plan.

Of note, on-line retail and the associated UPS, Amazon and Fed-Ex delivery trucks significantly reduce car traffic.  Just 150 packages spread across 3 truck routes can eliminate more than 300 car ride legs back and forth from home to stores, between stores, and back home.  The trucks are still on the road, and show up at various points to make deliveries as well, but they go along way to reducing car traffic as society and transportation continues to evolve.

Here's another interesting (to me) article, this time in Deadspin. Again, it focuses on NYC, but I think the parallels with Chicago are pretty strong.

Another Dead Cyclist in the City

A few particular points I thought worth highlighting:

I think most of these issues should factor into the mayor's approach to cycling in the city.