I know West Town offers to pick up abandoned bikes. 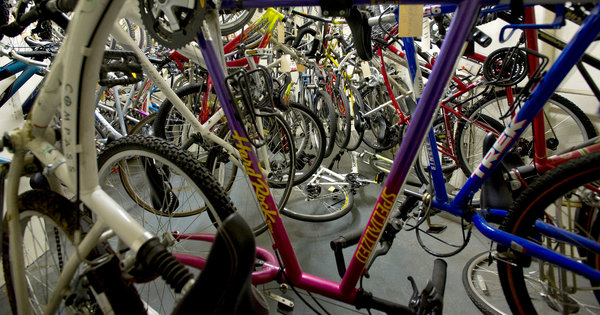 CRAMPED AREAS Bicycle rooms have become a lure for many apartment hunters in the city, but many bikes are left behind in them, often for years.

THEIR frames molder and peel in the city’s musty depths. Hundreds — perhaps thousands — rest in haphazard jumbles, their surfaces pocked with rust, their tubes airless and stiffened by time.

Yvenet Alcius is with the group Recycle-a-Bicycle, which refurbishes rescued bicycles in a warehouse in Long Island City, Queens.

No firm numbers exist for how many bicycles sit abandoned in storage rooms around New York City. They decay uncounted in dim basements, mixing awkwardly with sleek new city cruisers and carbon-fiber racers, threatening to turn an increasingly marketable real estate amenity, the bicycle storage room, into something like a bone-filled catacomb.

“You have no idea this world of bicycles that’s awaiting you,” said Pasqualina Azzarello, the director of Recycle-a-Bicycle, a nonprofit group that says it rescues 1,200 bikes each year in the city, most of them from basements. “It’s something that we deal with quite often.”

In the group’s warehouse in Long Island City, Queens, scores of handlebars hang from a rafter, and rows of forks and frames line the wall of a large workshop.

“Pretty much all of the bikes we work on have to be completely taken apart, cleaned and rebuilt,” said Rommel Bishop, 30, who runs the group’s education program. Refurbished bicycles are donated to schoolchildren or sold in two storefront shops, in the East Village and in Dumbo, Brooklyn.

Mr. Bishop, who owns eight bikes of his own, looked over a collection of wheels: “dry-rotted,” he said of one; “completely rusted,” of another. “It gives you an idea of what the bike was like that they came from,” he said. Roughly 300 aging bikes await disassembly in a crowded room nearby.

With the surge in ridership in recent years, bicycle rooms have become an attractive lure for many apartment hunters, and the Bloomberg administration has sought to increase bike commuting by requiring new buildings to include bicycle parking.

But the arrival of more riders has set off a battle for space in these often cramped areas. And long-term storage, especially when cold and snowy weather makes an early appearance, can be hard to differentiate from abandonment.

Nathaniel E. Baker, 38, an avid cyclist, said of one particularly dusty specimen in the bike room of his small Upper East Side walk-up: “I don’t think it’s been taken out in years. Just the last few weeks someone put a tarp over it like it was a dead body.”

He is not alone in his frustration. Liz Patek, a professional dancer, said most of the bikes stored in her large rental building on the Upper West Side sat idle through much of the year.

“Of the 80 or so bikes I count between the two rooms,” she said in an e-mail, “at least 75 percent go unused all year round. There are four commuters (including myself) that make use of the rooms and who commute daily.”

New and recently renovated buildings may have brighter spaces, wall-mounted hooks and vertical racks, but that does not mean there are no tensions.

“Everybody who is an owner feels entitled to a space, whether they use the bike or not,” said Chris Benfante, 50, a cyclist whose condo building in Fort Greene, Brooklyn, has two bicycle rooms on the eighth floor. “We get complaints — usually from the people who use their bikes the most.”

“I tell people as they’re moving in, I show them the bike storage room,” he said, “and they inevitably ask if they’re guaranteed a space. I have to tell them no.”

Last month, the building posted signs asking residents who had stopped using their bikes to voluntarily clear them out; it also installed new racks. Both measures, Mr. Benfante said, helped with the crowding that had often forced him and his regularly riding neighbors to haul their bicycles into their apartments. “It was kind of frustrating,” he said.

Doug Gordon, a 37-year-old television producer who commutes by bike to SoHo, said he had the same problem in his Gowanus, Brooklyn, rental.

“If I happened to have a night where I stay at work late,” he said, “there will definitely be times where it will be easier for me to bring it up to the apartment.”

Many building managers and co-op boards try periodically to cull storage areas by asking active users to tag their property. Bikes without tags, the theory goes, can safely be assumed to be abandoned.

That’s how Recycle-a-Bicycle ends up with huge caches of old bikes. “We average between 20 and 25 per building,” Ms. Azzarello said, with some pickups netting more than 50 bikes. A recent large haul came from the basement storage of an 11-building rental complex in Far Rockaway, Queens, she said.

This appears to work better in some places than in others. “Every other year, the management company posts a notice that all bikes need to be tagged with the owner’s apartment number or they will be removed,” Ms. Patek, the Upper West Side dancer, said. “To be honest, the last time they did this, no bicycles were removed.”

Other buildings have limited access to storage rooms, requiring application forms and monthly fees. “It’s a small revenue generator,” Stephen Corsello said of the $50 yearly fee charged by his 46-unit Washington Heights co-op for use of a new basement bike room. “As far as bikes languishing, we haven’t had any bikes for more than a year so we haven’t run into that yet.”

And at Recycle-a-Bicycle, not all of the bikes that are abandoned and later decay can be resuscitated: the group also recycles roughly six tons of metal every year.

A version of this article appeared in print on November 6, 2011, on page MB9 of the New York edition with the headline: Salvaging Abandoned Bikes, Making Room for Others.