It looks like striping was completed yesterday for a protected lane on Marshall... at least from the south end of Douglass park to the bend towards 24th street (I personally don't have much use for a bike lane on the boulevard so can't speak to how far it extends either way...).

I guess that writing to Gabe Klein worked, because CDOT came out this week and replaced the signs.  They now properly say No Parking on the east side, and there are no rush hour restrictions on the west side.  The cars are mostly parking where they're supposed to.

There are still some major problems with the road surface, especially under the Metra tracks, but this is a huge improvement.  It was great riding in the actual bike lane to my house tonight!

Would you be interested in offering a service in which people bring their issues to you and you write to Gabe Klein to get them fixed? If you're not comfortable accepting cash, maybe they could donate to a cause of your choice with each completed request?

If you live in the area please try to make this meeting-- I don't know for sure, but suspect the majority of attendees will be there to complain about the bike lane.

Discuss Bike Lanes on the Boulevard.
Representatives from CDOT will be present for questions.

If you live in the area please try to make this meeting-- I don't know for sure, but suspect the majority of attendees will be there to complain about the bike lane.

Thanks for the info.

Yes, I suspect you're right that most people will be speaking against the bike lanes.  I've heard as much from folks in the neighborhood.  They think that there are not enough cyclists using the bike lanes to justify the parking that was removed.  Of course, that's a very short-sighted way to look at it, but it is true that there are not as many cyclists in Little Village as in other parts of the city.  Cycling seems to be perceived as a "white" activity.  The addition of a Divvy station at 24th and Marshall (right in front of my house) next spring should help with the numbers, though not necessarily with the perception.

Also, while there are fewer parking spaces overall on Marshall Boulevard now (there were never any on 24th Boulevard), the ones that are there are 24-hour spaces, instead of spaces with rush hour restrictions as in the old, pre-bike lane configuration.  So while there is less parking when there's an event at the Apollo's 2000 theater (which should provide parking for its customers instead of taking up free public parking), there's more parking overnight for people who live in the neighborhood.

Plus, the bike lanes have had a traffic-calming effect, forcing people to drive more slowly.  The sharp curve at the corner of 24th and Marshall used to be good for at least one bad crash a month; it seems to be better now, so far.

Admittedly, the bike lane isn't perfect.  With one lane each way, and the parking usually pretty full, there's no room for cars to even pull over and drop people off or pick them up without stopping in the bike lane.

So now, when all these people park illegally, it's no more or less illegal than it was before, but now they're blocking the bike lanes.

Hopefully I've got next Wednesday scheduled as an earlier workday.

Is there any chance you can be there, Dan? Maybe a little scratchy throat kind of thing that morning...? Hopefully I've got next Wednesday scheduled as an earlier workday.

Is there any chance you can be there, Dan? Maybe a little scratchy throat kind of thing that morning...?

I will try very hard to make it.  I'm also curious to see the inside of the building. 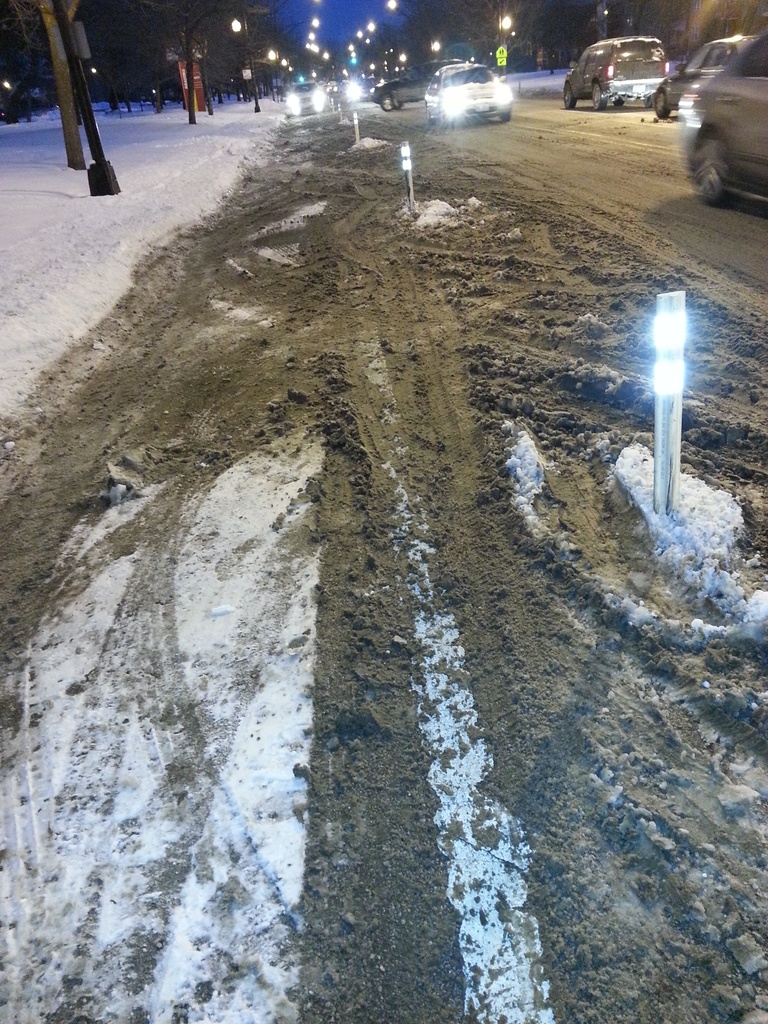 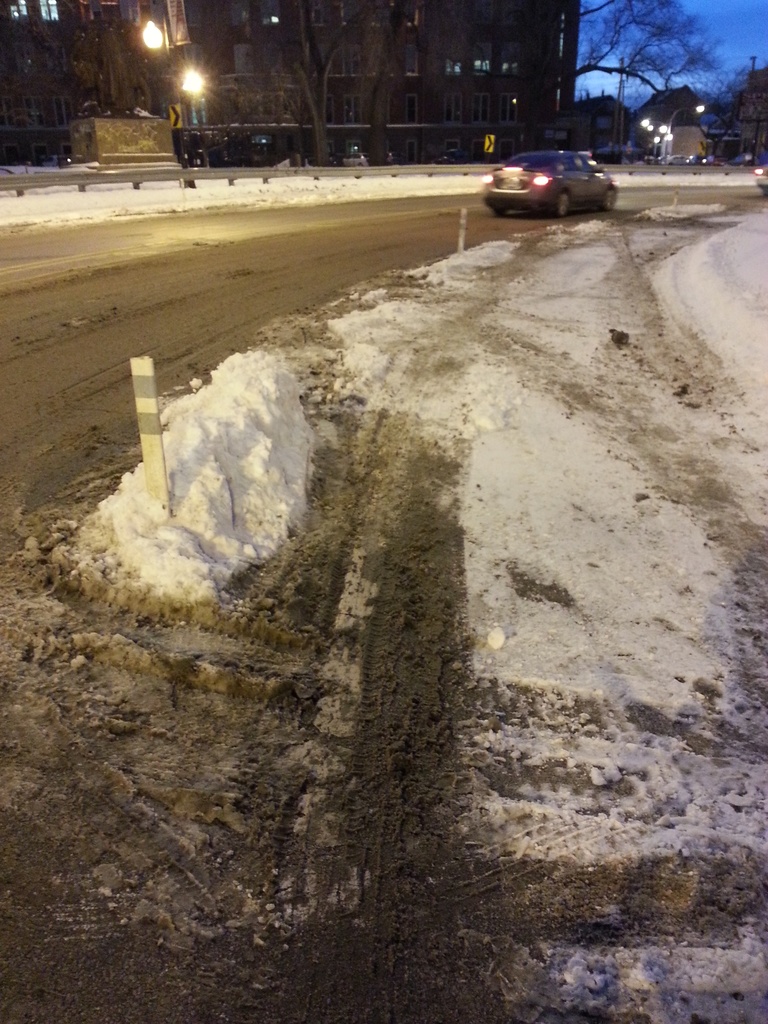 *to distant future readers... this is on a weekday/ non-holiday around 5:30 PM, about 18 hours after last snowfall.

This is another reason why I prefer buffered lanes.

*to distant future readers... this is on a weekday/ non-holiday around 5:30 PM, about 18 hours after last snowfall.

Yes. For reference, the protected lanes on the 18th St bridge were nicely plowed and (over)salted this morning. Except for the last few feet eastbound under a viaduct just west of where the lane ceases to be barrier protected. At that point there is* giant pile of snow (ok, so perhaps only a foot tall, but tall enough when frozen to force riders out into the non-bike lane).

On the bridge, the plowed protected bike lane provides a nice side-effect: there is plenty of room to share the lane with pedestrians who formerly had to either walk in the street or make their way over an un-shovelled sidewalk.

Dearborn was also plowed and salted pretty well this morning - at least from the southern terminus to Monroe. There was a lot of crap on the Federal Plaza block, but at least Lake Kluczynski was not yet making an appearance.

*at least as of this morning
Anne Alt said:

Wow, they actually plowed 18th St. this a.m.?!?  I missed seeing that because I was sitting on the east side of the train on my way into work, trying soak up a little sun. Thanks for the good news.