Please feel free to share with your friends or repost on your social media accounts. Hopefully it will help! Thanks everybody! Nice video, covers almost everything I can think of. 1:00 in is particularly useful. Locking up even inside a secure space is important, seems like lots of people are getting bikes stolen from storage spaces and garages lately. Locking up inside perhaps only slows the theft but worth a shot if the thief was expecting an unlocked bike to steal and doesn't have the right tools.

Also, would you consider adding a segment on bike rack locking etiquette? I see plenty of lock jobs which take up way too much space on overused racks.

One of your finest, Jason.  Sent it to my niece who seems to have some trouble with the concept. :-)

It's interesting that the "Sheldon Brown method" (capturing only the rear wheel in the U-lock, without any frame members) is the locking method shown in all the "YES" examples. But then this is contradicted when we get to the explicit locking instructions, where the U-lock suddenly triples in size, and we're directed to lock around "at least one of the main tubes of the bike".

Was the "Sheldon Brown method" considered inferior, or just too difficult to communicate in this video?

I don't like the opening 38 seconds, and sadly much of the rest of the video (which contains some accurate and very useful information), will be lost on viewers who are still sitting there thinking that no matter what they do, someone can steal their bike in 18 seconds. The lock that gets cut "like buttah" is a round-keyed, bent foot Kryptonite u-lock that hasn't been manufactured since the first term of the (2nd) Bush administration. It appears to be, at best 10 mm. Encouraging people to lock with a decent u-lock to a bike rack or parking meter, would go a long way to reduce stolen bikes in Chicago. The lock used by Jason for demonstrative purposes is NOT a decent U-lock.

Well, I know Jason didn't post this here looking for critique....  but hey, this is a discussion forum, we discuss.....

Definitely a good effort overall.  Good job on the pacing, narration, overall tone; only a little roughness in the editing.  And peachy-keen that the "Cable locks should only be used as doorstops" message was front and center.

But I also had a problem with the opening. A good battery operated angle grinder in the hands of an experienced thief would require about 30 seconds to cut an average U-lock.  An average to crappy grinder (like mine) might require significantly longer.  I don't see the value of demonstrating the defeat time using a corded grinder.

Missing for me is:

1) There's a lot of mention of locking to fences-- would have only added a few seconds to recommend locking to the thick support beams only-- we have had to read many sad reports of the thinner beams being sawed or broken at their welds to steal U-locked bikes.

3) As mentioned in another thread-- we've had to read lots of reports of bolted poles being removed to steal bikes-- I would have suggested signposts to be avoided entirely if possible.

I have to say I am extremely pleased that the term "sucker pole" was not used (or was it?)

That term needs to die.

Also pleased that the correct way to lock to an inverted U rack (bike alongside and parallel to rack) was demonstrated.

Permalink Reply by Active Transportation Alliance on August 7, 2014 at 10:12pm

Oh not to worry, we'll be following up with an epilogue video soon that gets to some of those next level pro tips like the Sheldon Brown method etc. that we couldn't fit into this one! ;)

As for the lock I cut, it was actually a square key kryptonite, one of their "keeper" series purchased about a month ago directly from QBP.

It's definitely still in production, albeit one of their cheapest models. However I've also cut their most expensive Fahgettaboudit locks in only about 15 to 20 more seconds using the same tools. The point being that the amount spent on a lock isn't as important as the combination of technique, location, type of lock etc., and an over-reliance on any one of these components can be a weakness.

Sadly, there is no magic bullet when it comes to theft deterrence (and I think it's best to be straightforward about that from the beginning), but there are strategies that can be combined to mitigate the risks, which truthfully is the best we can do in life.

But thanks for watching!

For me the choice of lock was quite effective - on first glance it looks very much like the Kryptonite 4 I purchased in 1976, which is still my primary lock. (I'm in the far NW suburbs and seldom lock up in locations where theft is likely.)

Interestingly enough, when I contacted Kryptonite a while back to see about getting a spare key cut, they informed me that they will still honor the lifetime guarantee and replace the lock with its current equivalent. (That I have not done the exchange is testimony to my procrastination, not any difficulty with the process.) All they require is an intact lock and at least one working key.

As for the lock I cut, it was actually a square key kryptonite, one of their "keeper" series purchased about a month ago directly from QBP.

It's definitely still in production, albeit one of their cheapest models.

I rode to McDonald's for breakfast this morning and parked my bike without locking it.

After, I road home.

Let's not get hyper-afraid of bike theft; a lot of bikes aren't stolen.

I went on a bike ride with my infant daughter and then left my bike in my fenced-in back yard for less than 15 minutes while getting her settled in the house without locking it.

The bike was stolen.

Let's not suggest people get hyper-complacent because we have a couple of anecdotal stories where we get away with not locking a bike; a lot of bikes are stolen.

I rode to McDonald's for breakfast this morning and parked my bike without locking it.

After, I road home.

Let's not get hyper-afraid of bike theft; a lot of bikes aren't stolen.

Saw this on my way to the Chicago 10k this morning. Either someone was too drunk last night, or just thought this was a good idea. 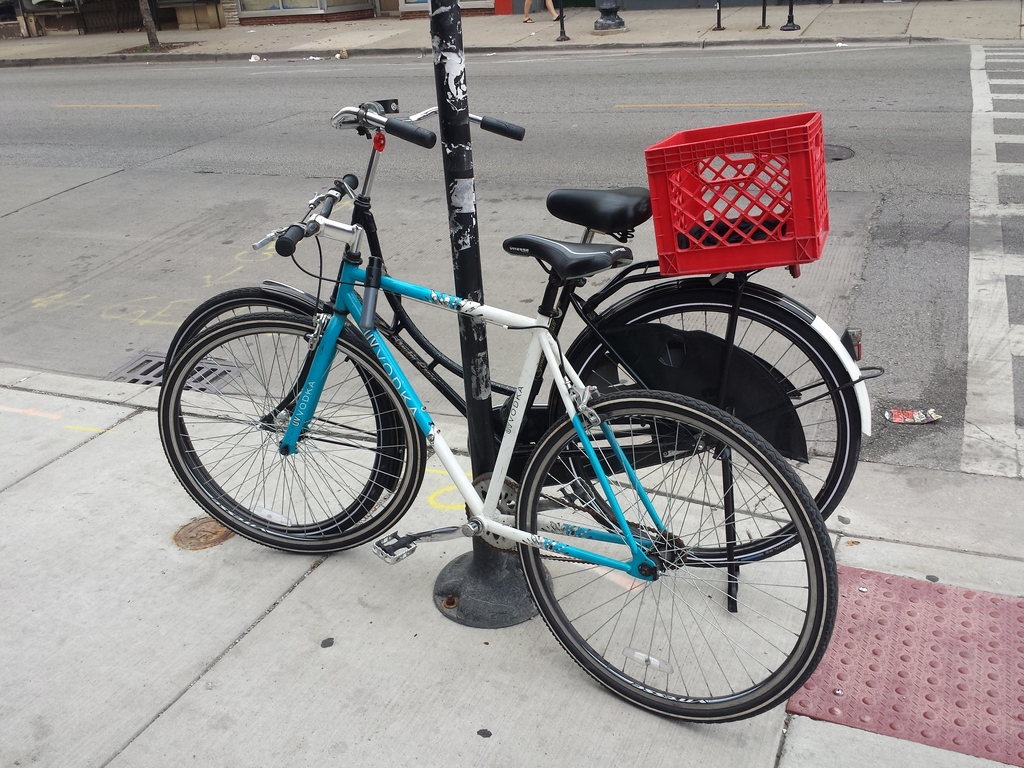