Finally got a picture of the motorbiker who's been stinking up the lakefront trail.  I've been blasted by his cacophonous cloud at least half a dozen times this year, so I became a bit cap't Ahab about catching him. 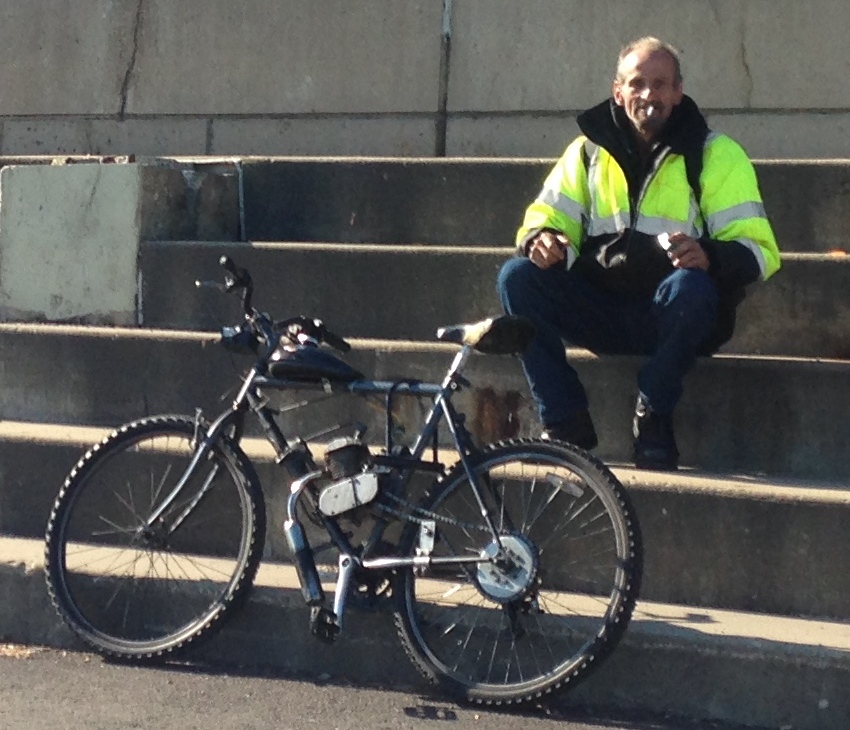 I'd guess he imagines he's cleverly found a loophole around his DUI license loss.  Next encounter, I'm calling cops.

Ugh. Any idea about how fast he is going?

Every encounter he's passed me fast, and I'm among the fastest on the path.  Today he passed me on the stretch between Oak and Grand, when I was surely doing not far short of 20mph.  Fortunately that setup hopefully can't hit much over 35mph.

Have you seen him at certain time of day? Maybe it's during my commutes - I'll happily hunt for Moby Dick, and get some video.

Ditto.  The motorbikers Ive seen were much younger.

Saw a man taking a Vespa scooter onto the Paul Douglas Trail (Roselle & Algonquin rds, Hoffman Estates) last sunday. i was driving along Roselle when i spotted him. Now i know a Vespa can do 50+ without any effort, so it seems someone was afraid to drive on roads?? Sometimes i wish i were a cop. If i see him again, i'm taking his plate number down.

i hope that taking scooters and mopeds on trails isn't a growing new trend.

i hope that taking scooters and mopeds on trails isn't a growing new trend.

There will be a bunch of wannabees who want to be "in" with the cycling crowd, but down want to expend the effort.  We'll see them on the lakefront, on the county paths, on the bike lanes.

I see him a few times a month.  He's usually riding up Broadway between Lawrence and wherever it is he's going.  His back rim was warped so bad that I was sure it was just going to collapse on itself.  A charmer it seems!

Argh, researching more, it's remotely possible that this is legal.

Motorbikes (as opposed to scooters and mopeds and motorcycles) are allowed?!?!?!?!?!?!?!?!?!?!?!?  Defined as fully operable pedals, no gear shift, under 50cc, under 1hp, under 20mph.  I'd suspect this waste of skin is exceeding the hp and mph limits, but ticketing is less cut and dry.  Guess I'll just have to wait for his inevitable karma to come calling on it's own.

Can anyone confirm this is true or not?

I searched, and couldn't find an official city statement on disallowed LFT users.

I remember this coming up in the past, sadly, I recall it being true on the streets.

I've attached the Park District code of conduct, it would seem to come down to whether a motorized bicycle is considered synonymous with bicycles in general, this isn't covered unfortunately.

I did find this, reinforces what you found I'm afraid:

One of the hottest trends in the bicycle industry today is the e-bike, a regular looking bicycle with a small electric motor ("e") that can be switched on or off.  Switch it off when you want to pedal and on when you don't.  These are not at all like motorcycles, nor are they mopeds, both of which are substantially more powerful than e-bikes.  In Chicago, the law permits an e-bike rider to do pretty much whatever can be done with a old-fashioned peddle bike.  Recently, I received an email from a reader inquiring about this issue:

Was on your blog but can't find this: are motorized bikes allowed on the Lakefront path in Chicago? Thanks for any help. My son wants to ride his to work in South Loop from North Side.

Thanks for your question.  Certain types of motorized bikes are governed by the same rules that apply to regular, old-fashioned pedal bikes, and are permitted on Chicago's Lakefront path.  "Low-speed electric bicycles" and "low-speed gas bicycles" are permitted on the path.  Mopeds and motorcycles are not.  To be considered a "low-speed" bike, the cycle must (a) have fully operable pedals, (b) an electric or gas powered motor of less than 1 horse power, and (c) have a maximum speed of less than 20 mph.

All he has to do is claim some restricted ability.  Can't even ask for proof.
http://www.americantrails.org/resources/accessible/power-mobility-q...

I saw about five Moby's this weekend. There's even this guy the cops are looking for.