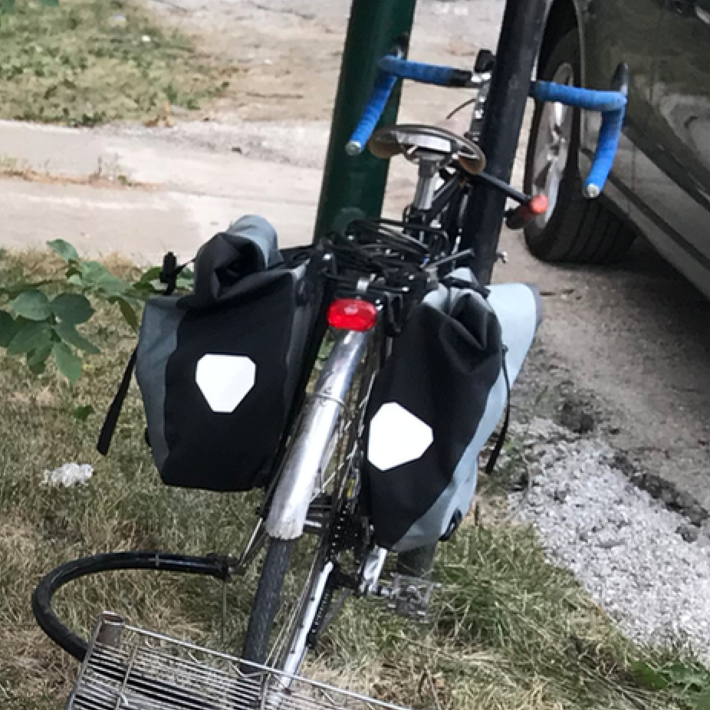 This is kind of embarrassing, and I've been a little depressed about it, which is why I've probably waited longer than I should have to go public with the story, but here goes. Last Friday, September 6, around 1 p.m., somewhat sleep-deprived, I parked my touring bike on the rack outside the Lincoln Park branch of the Chicago Public Library, located on the DePaul University campus at 1150 W. Fullerton Ave.

Security camera footage footage reviewed by the DePaul police (who have been very helpful) shows that I forgot to lock the bike. While I was inside the library writing for a few hours, around 1:20 p.m. a guy rode up on a too-small white-spray-painted department store mountain bike.

He checked out my bike and saw it wasn't locked, hung out in the library's lobby for a half hour, and then rode off with my bike around 1:50. (His mountain bike was there, unlocked, when I visited the next day.) According to the DePaul police he's somewhere around 6'2" and was wearing a white jacket, black pants, and a shoulder bag -- see attached security video stills. The video is too grainy to positively ID him.

I am *not* interested in pressing charges against the guy -- this situation was my bad for sleepily leaving my bike unlocked, and the guy was simply yielding to an understandable temptation. However, I'd really like to get my bike back, since it will be expensive and a hassle to replace it and all its specialized parts, and it has a lot of sentimental value since I rode it coast-to-coast twice. I'm offering a $500 reward for the return of the bike in decent condition, no questions asked. Even if the guy who took the bike contacted me, I would gladly give him the $500 to get the bike back without contacting the police.

The bike was a 56 cm Soma Doublecross touring bike with a very dark green (looks black), slightly iridescent frame. Two gray Ortleib panniers were cable-locked to the rack. The bike had cobalt blue handlebar tape, an Ortleib handlebar bag attachment, and a brown Brooks Cadmiun rubber saddle. It had silver-colored metal fenders. Tires are 28 cm Schwalbe Marathons and it had "campus" pedals, flat on one side, SPD bind on the other. A bike trailer hitch was attached to the rear left side of the frame. It's likely that the appearance has been altered by spray-painting the frame, etc.

I'd appreciate it if you could keep an eye out on the street, on local bike-selling discussion groups, or at your bike shop (please consider printing out a photo of the bike and posting it on your bulletin board to give employees a heads-up), and contact me at 312-560-3966 or greenfieldjohn[at]hotmail.com if you see it. Feel free to share this post elsewhere on social media. 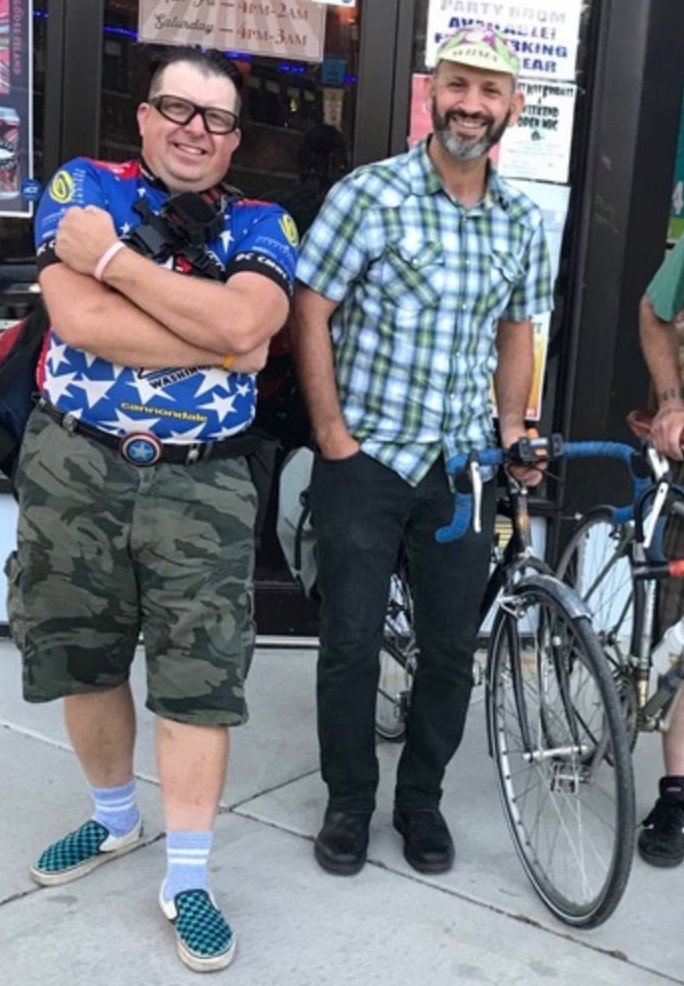 For all that you do for the biking community, this is extremely unfair. I sure hope you get your bike back. You're a better person than I am -- to me, stealing someone's bike is never an "understandable temptation", especially since he probably stole the bike he was riding before he stole yours, too.

Thanks a lot Jim, I appreciate the good vibes.

I'll be on the lookout for the stolen bike, no reward required, and I'm rooting for the idea that if I help get it recovered we could together buy a bike for a needy child with a fraction of the reward, but the reward might help get some action here too I hope.

You're right of course Jim about the bike thief likely riding up on a stolen bike, and these crimes aren't an understandable temptation imo.  If not dealt with, he'll likely continue it - unfortunately your bike or my bike may be next - we're all at risk.

(To empower us and clarify that, with bike theft, nobody but the perpetrator is at fault. If my wife is absent minded and doesn't lock the front door and there's a home invasion, it's really the perpetrator who's to blame for an attack on my family.)  We have a right to have our bikes out in public and not have them stolen, and not live on lock-down because we like to ride, although I'm appreciative of a sympathy or forgiveness sentiment when appropriate.

Meanwhile, if certain cyclists keep opposing adoption of the cost-effective registration system already in place with for two-wheeled motorcycles or cars or trucks all using that same registration system regardless of vehicle type, then the bike theft business remains that much easier.  (Theft doesn't go away with mandatory  registration but it curtails it)  For now, we're left with our voluntary system, which alas is weaker because it isn't comprehensive, and thieves know that.  https://operations.chicagopolice.org/BikeRegistration/Account/Login

I'm aware some members of the community contend that mandatory registration curtails cycling, when actually, not having our bikes when they are stolen can curtail cycling. To head off any notions, "studies" or "analysis" that we see out there that bike registration is ineffective or too expensive and fails, we already know that registration for Bike-The-Drive is a fund raiser, just as it is for cars, motorcycles and trucks.  (The "failures" are enforcement failures, and, new expensive registration systems instead of just properly adding to the existing effective registration system)

At some point, people may stop opposing this and see that registration opposition just costs cycling and society more in the end.  Regardless, it's time we work together to stop bike thefts, and the rotten impact they have such as we've learned of here.

A bill-board post or something at DePaul or elsewhere in the area with the details could help us with this too.

So sorry this happened.  I hope very much you can recover the bike, and I'll keep my eyes open.

Bike theft is really personal, especially when it's a bike that you've spent a lot of time setting up, and much more so after you've collected some little dents and scratches from your adventures.

A car is just a car; mine is the same as thousands of others.  But nobody has a bike like mine, with exactly the same components, and everything adjusted just as I like it.  I've usually messed around with a new bike for a year or more before I feel like it's *just right*.  If my bike were stolen, I'd be annoyed about the monetary loss, but would feel really violated and angered by the loss of my time and effort.