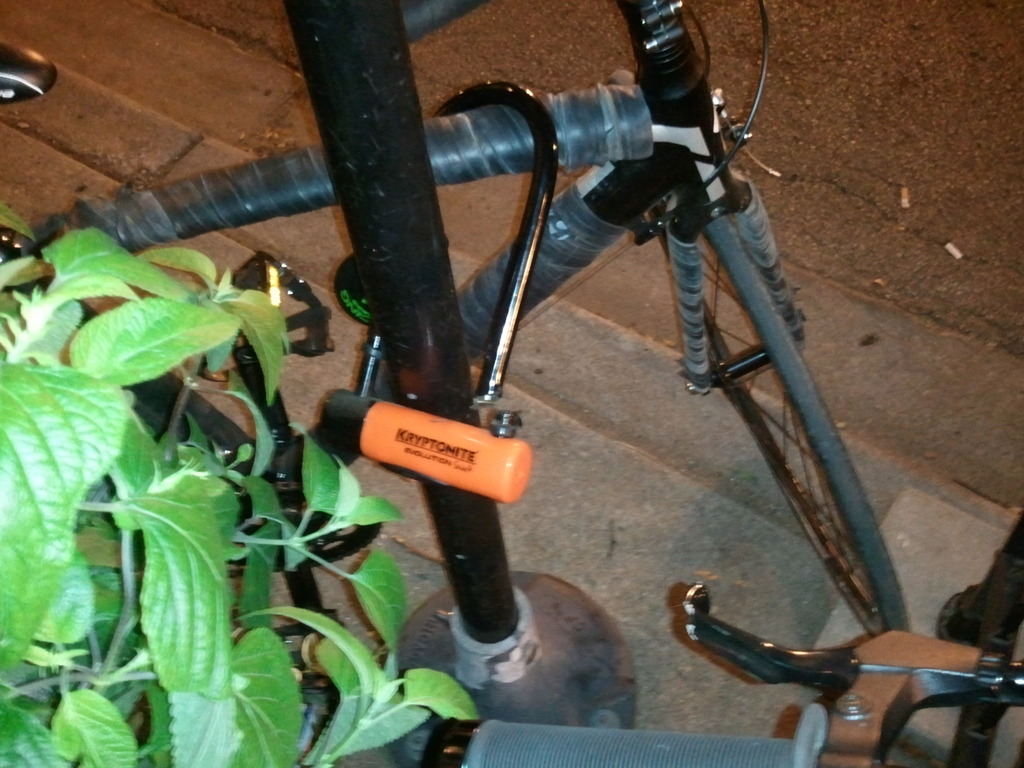 Well done! The owner owes you dinner & a beer at the least!

Thanks for this explanation, Cameron! And WOW, I park my bikes (not overnight) near the Daily nearly every day of the year as I work at the Old Town School. This is a huge heads-up to me and my coworkers, two of which have had their bikes stolen recently. I wish I had a pic of the dude to put up!

With a single dead bolt, the cut pictured would have caused the lock to easily fall away. In this case with a single dead bolt, the bike would have already been stolen before nerdjefe happened on the scene and intervened. Since the lock was a double dead bolt two cuts were required to free the bike. In the picture you can see the beginning of the second cut just to the left of the pole. The extra time required to make the second cut slowed the thief down enough that nerdjefe was able to intervene.

Could you explain the advantage of the double deadbolt? Just guessing here:  on a "standard" u-lock, the non-lock side slides out easily; a double deadbolt prevents this by locking both ends of the U to the cylinder (?).... So if you want to remove the it, you have to cut through both sides...

This also shows why it is important to have a Double Deadbolt type of lock!

I wish we could get the owner's feedback...

Thank you so much.  as the victim of a few bike thefts, I applaud you.  well done.  the more we speak up, the more they know we are watching them.  Cycists have to stick together.  Thank you again:)

Permalink Reply by Patrick Mannion on August 5, 2012 at 5:33pm
My bike is safe! Thanks to nerdjefe! I am amazingly lucky!

in it to win it said:

I wish we could get the owner's feedback...

My bike is safe! Thanks to nerdjefe! I am amazingly lucky!