Is this bike route somewhat safe?

Hey guys, I have a friend that just moved into a place on the south side and is throwing a house warming party tonight. I plan on maaaybe riding down there but I'm unsure if this route is dangerous because I never bike that far south from my area. Otherwise I'll just take the 52 bus or train. 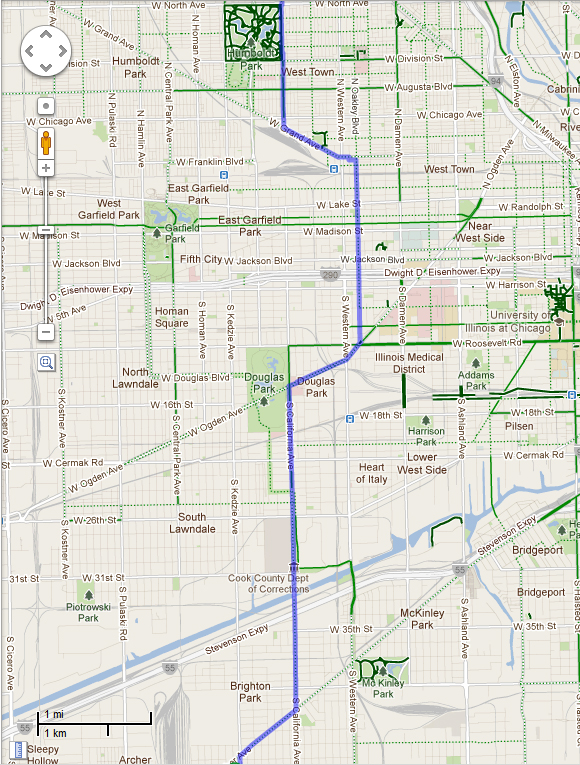 I'll put my own route together and Minh can have some variety.

I can't stand riding on main arteries if there are secondary streets available-- there are only a very few stretches of Damen south of Bucktown that I find safe to ride on (in regard to motor traffic, not street people.)

Re: Damen/Lake-- the references in this discussion have been more re: Lake and Western-- but there were a few attacks on cyclists (as in a group jumped out and tried to beat people off their bikes) reported here last fall that occurred at Damen and Adams, specifically. Never any way to know whether these are abberant occurences, or just a sample of a larger number we don't hear about, without a good way to report/track these.

I see you got a ride to the party last night, but if you're thinking about riding to your friend's house in the future, here are my suggestions:

I live at 51st and Western and I usually take Damen back and forth to Humbolt Park.  It looks like you'll be taking Archer eventually, so just take Grand all the way to Damen and follow Damen south to Archer.  There's a bike lane/shared lane most of the way, except a short bit from Lake St. to I-290, and I usually just take a lane here so people aren't trying to squeeze around me.

To the people saying Damen around Lake is bad, I've never had any problems, at any time of day or night.  Sometimes there is some shady stuff going on but just keep your eyes open and be alert.

If you want to skip some hairy (i.e. heavy/speeding traffic) sections, jump on the sidewalk on Damen south of Blue Island to go over the river/I-55 bridge.  There are curb cuts at the intersections for I-55, just pay attention for red-light runners turning onto the highway.  Also, Archer is a pretty busy street with no bike lanes, so what I usually do is cross Archer and cut through McKinley park to Western/31st.  If you keep going west on 31st you will hit Archer again after a short bit through some neighborhoods that are only a little sketchy.

Hope that helps you out some.  I've been doing that route for nearly a year now and it's pretty much the quickest, safest south side/humbolt route.  If you're feeling like a longer, safer ride through nicer neighborhoods I can give you some other recommendations, but they'll take you further east.