has anyone tried the Midwest Recumbent Rally?

I'm curious about the Midwest Recumbent Rally and wondered if any of you have tried it in past years.  If so, was a fun, well run event?  What are the riding conditions in that area?  Is anyone planning to go this year?

Thanks for the info.  Sounds cool.

Penguin returned to the penguin colony - love the description.  ;)

My wife and I attended a few years back. Sorta like being a penguin that's returned to the penguin colony.  It feels nice to be anonymous ie NOT stick out in a crowd of cyclists.

There were organized rides; bent manufacturers as well as bent-specific accessory vendors; networking with other bent riders.  A nice feature was that you could test ride lots of different bents. Probably the best part were the group rides - bents on the road for as far as the eye can see.  The event seem well organized overall.  The rides were on back roads.

It was a fun weekend getaway.  Beards and aero-bellies are optional.

I attended the 1st 2 rallys in the mid 90's, when it was held at Amherst high school outside of Stevens Point. It was the dawn of the recumbent era, there were recumbents made of pvc tubes, alot of regular 10 speeds converted over, new manufactures then were Rans and Vision, both now gone from the scene. I had one of the few Lightning P-38's in the area. It was a great time, people would chat with one another, rides were on country roads, rare traffic..Now days, the rally I beliee is held in Stevens Point at the Hostel shop, which sell recumbent gear too. My friends still attend yearly, me, I am at another dawn, the Ebike.

This one image sums up the experience: 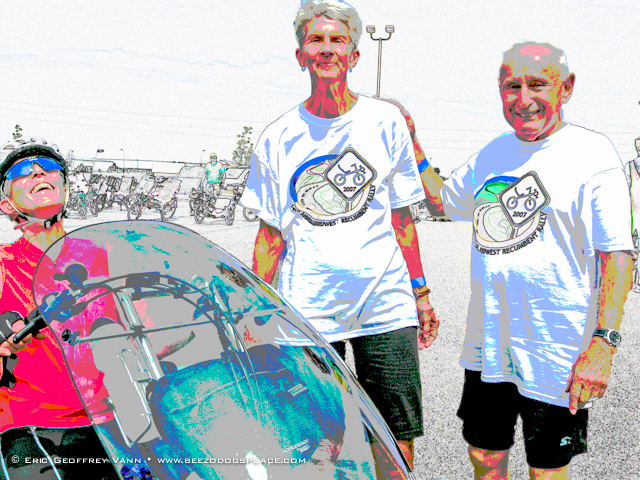 Are you thinking of Ed Dixon?  I don't remember him on a trike, but I've seen him on 2 different recumbents in recent years.

Thanks for the info.

The fellow to talk to is a past president of the Major Taylor Bicycle Club. He was there a few years back on his trike. The store is now moved from the Stevens Point site a few miles south. It is easy access from the highway.

Routes are on rolling terrain. You should do well since you live in Beverly. We have been to the rally quite a few times. We don't stay for the full three days but usually come up on the Saturday and enjoy a meal and an afternoon ride.

As others have mentioned you can get you fill of test rides on Saturday as well. Since we don't stay for the entire affair we generally decide at the last moment whether to attend or not. Then we load up the bikes and drive for the four hours or so it takes to get there and afterwards ride back sleepy and tired.

But as always the trip is well worth it because of the fun you have meeting new folks and enjoying the bikes.

You missed my point. If you are trying to show that rally participants are having a good time, why muddle the picture with some silly Photoshop effects? It just detracts from the message you are trying to convey.

I'll be charitable and assume that you have a rather clumsy way of being light hearted. Enjoy your day!

Fun pictures.  Tough to identify him from this angle, but I don't think that's Ed.

I posted an album of images from various Midwest Recumbent Rallys (including the one show above) to this site at this location. One of those images is of the gentleman I mentioned. I believe I saw him later riding a trike in the first(?) of the Lee Diamond led tours of Hyde Park a few years ago. I'll check to see if I can find any images of him from that ride as well.

Are you thinking of Ed Dixon?  I don't remember him on a trike, but I've seen him on 2 different recumbents in recent years.

I interpreted it as humor.

I'll be charitable and assume that you have a rather clumsy way of being light hearted. Enjoy your day!

Unless it's in a journalistic or documentary context, who says that photography has to be absolutely unaltered and representational?  It's such a flexible medium of expression.  Tools like Photoshop increase that flexibility.  I enjoyed the creative Photoshop interpretation of the photos.  For me, it enhanced the sense of fun those photos conveyed.

As with any kind of art, everything won't be to a particular viewer's personal taste and that's okay.  That's one of the things I love about art.  Look around and there's something for everyone.  If you don't like, that's your right.  It's possible to politely disagree with someone's creative work without insulting it.  The combined effect of the two comments was rather insulting.

Duppie - I understand that you might have preferred a more literal interpretation of the subjects.  At the same time, I'm a believer in civility on this forum.  You've contributed to a lot of productive discussions.  I've enjoyed those positive contributions, and I'm sure that many others have also.  I look forward to more of them in the future.

As with the Clark Park boathouse discussion, let's remember Rule #1 of the Chainlink discussion forum.

First and most important rule: IF you can’t be polite, don’t say it. We recognize that many topics will be controversial and the nature of a discussion or online posting is that people will bring to it their own opinions, ideas and background. The general idea is that you can disagree with someone without being disagreeable. The rules of debate help the site function better, and will help keep discussions from deteriorating into attacks. Focus your topics on cycling, and your comments on the topic and position, not on the people making them. This means no personal attacks, name calling, hate speech, aspersions about someone’s mother or background, comparisons to notorious dictators… you get the idea. Under no circumstance should a member post anything that might be considered threatening, harassing, bullying, obscene, pornographic, sexist or racist.