DNAinfo, "Tickets for Parking in Bike Paths on the Rise (MAP)"

While the number of tickets is slowly on the rise, is it adequately keeping up with the bike lane growth? Parking in the bike lane is a safety issue, forcing cyclists out of their lane and into traffic. It's good to see DNAinfo covering the issue. 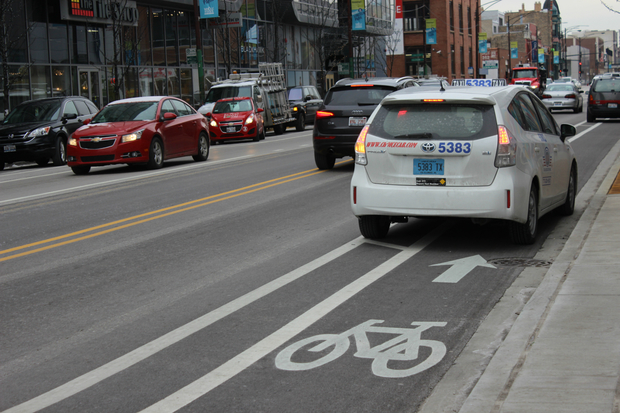 Over the last five years, the city has been steadily increasing the number of tickets it issues to cars for illegally parking in bike lanes, according to data obtained by DNAinfo Chicago through a Freedom of Information Act request.

But some critics question whether the city is enforcing the law enough.

This picture is an example of where enforcement of this law becomes tricky.  Where is that driver supposed to let out a passenger?  If the driver stops in the auto lane, that is just as illegal.  From the driver's perspective, stopping in the bike lane obstructs fewer vehicles and allows the passenger to open the door over and immediately step onto a sidewalk.

People parking and idling in a bike lane should receive tickets.  This picture shows what should be an exception.

A temporary stop and drop isn't an issue for me.

The minivan up ahead on the other hand...

I appreciate the increase, but that's still only about six and a half per day over the entire city.  I know single blocks where you could write more than that in 20 mins.  There probably are six people illegally parked outside of the main post office right now.

Why won't Rahm think of the revenue it would generate?!?

I had the very same response (it didn't make it into the article). What a great revenue generator AND it'll make people more safe. Win-Win! :-)

People complain about red light cameras existing solely for the revenue generation.  The reasoning for ticketing bike lane violations (and other vehicle violations) should center around: