I'm curious. What are the now multi thousand-members of the chainlink riding.
Afterall, this is a website specifically for bicyclists, so to even bother logging-on, you may pay more attention to your bike than the rest.
So when it comes to what is between your legs, are you buying whatever comes stock on the racks of the LBS, or, are you personally, or with the help of your LBS building a bike to your own preferences for durability, weight, style, whatever? This also leads into the branch of custom made frames, but for obvious reasons I will lump this with custom built bikes.
feel free to indulge on any details or insights.

I prefer custom myself. Part by part is the fun of it all... and the only thing to keep me occupied through the winter.

Permalink Reply by Melanie K on March 1, 2011 at 11:15am
I am re-hatching this link only because I am looking for someone who could do some custom frame-building, and noticed the pic of two bikes being combined to make a heavy-duty hauler. My boyfriend would love to have a custom heavy-duty bicycle that would fit his body frame, and would be good for heavy hauling and maybe even touring. After seeing this pic, I was wondering if anyone out there has the frame welding know how and time to build a custom bicycle and be willing to talk to us about it.  We can't afford the $3,000+ I have seen for most custom bikes, but is it possible to maybe piece something together out of old bikes,  and make a decent down payment for the work to be done, like a payment plan until the bike is complete? Any suggestions would be welcome.  Thank you.


I'm helping a friend do some customization. The white Trek missing rear wheel & seat was purchased for $25. The green child's Gary Fisher was donated by West Town Bikes. The end goal is a serious cargo hauler inspired by the Xtracycle. 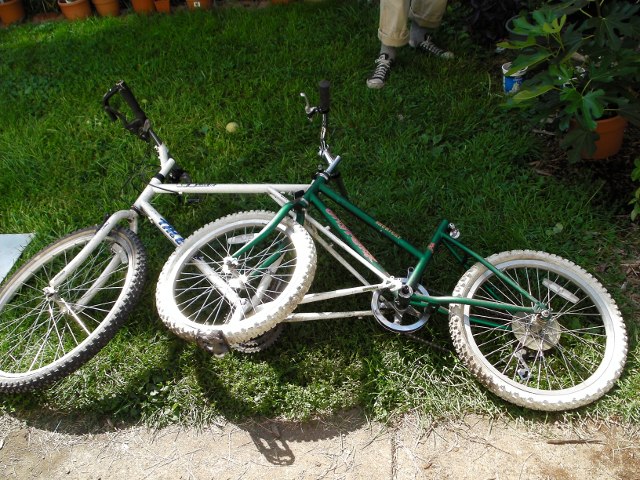 Permalink Reply by Doug Haynes on March 1, 2011 at 5:00pm
There are several talented frame builders working out of Bubbly Dynamics.

Customs aren't $3k, most start around 1,200-1,400 and go up from there with the fancy stuff. Most builders accept payment plans.

If you want a touring bike, what's not working with a Surly LHT, Pugsley, or Big Dummy, or a Bruce Gordon Rock n Road?

Permalink Reply by Anne Alt on March 1, 2011 at 7:46pm
I've got two bikes that are stock frames with non-stock components.  So far, that's been enough customization to suit my purposes.

Touring and hauling- and custom is due to our having the toughest time customizing a "stock" bike to fit my boyfriend's body frame- none of the bikes, no matter how much we push the seat back, lift it up, change stems, and push the handlebars forward, do not work out for him and he ends up extremely uncomfortable on most rides. Maybe I am wrong about the prices- I was looking at some pretty nice bikes and custom built frames online- so the prices are probably skewed towards the high end.  We tried the LHT and it is still a bit too short/small for him.  For $1,400 we figure we could buy a decent complete bike like the LHT, but the largest frame doesn't quite fit him correctly. I looked at the Bruce Gordon Bike, very nice- sadly, it costs about $3,000.   I had no idea that most builders would accept payment plans, though, so that is a consideration.

Basically, right now he is most comfortable on an old 27" (I mean frame size, NOT tire size) Schwinn 10 speed, which is a tiny bit tall for him, but the top tube and geometry are perfect. Maybe all we need to do is replace the tires to give him an inch or so clearance, and  I think it would do the trick. And be cheaper than having an entire frame custom built to accommodate his need for a longer top tube than current production bicycles have.

His birthday was coming up and I thought that maybe I could find someone who customizes frames- not that it would be done before his birthday, but maybe start it out so that he has something that fits him perfectly.  Thanks notoriousDug for the head up about Bubbly Dynamics- I looked it up and sure enough, there is a frame builder there.

Customs aren't $3k, most start around 1,200-1,400 and go up from there with the fancy stuff. Most builders accept payment plans.

If you want a touring bike, what's not working with a Surly LHT, Pugsley, or Big Dummy, or a Bruce Gordon Rock n Road?

Permalink Reply by Kevin Mulcky on March 1, 2011 at 10:23pm
I'm sure you have more experience than me J, I'm thinking Deposit+balance= payment plan. right? Some builders have a queue that's 8-12 months long, (some much longer) so after your deposit to hold your place in line, you've got enough time pay off the balance before it's done.

Oh I see -- it's a semantic difference. I think many people might mistake that for a situation where you get the frame and then pay down the balance. You're right -- most custom framebuilders require a deposit (often 50%) with the balance due upon delivery.

Many bike shops advertise payment plans -- these are different... basically they are banks loans or financing for bicycles, often with deferred interest. That's what I thought you were referring to, but they're something that most builders wouldn't touch with a ten foot pole :)

Rivendell makes a few of their frames in huge sizes, check them out. The Sam Hillborn comes in 64cm frame, with expanded geometry.

But they ain't cheap! They'd make a wonderful gift though, and they accept payment plans (as of today!).

Permalink Reply by Melanie K on March 2, 2011 at 5:39am
Yes, Rivendell is one of those wonderful websites I checked out, but sadly, I cried when I saw the prices. I am also looking for about half that price range.


Rivendell makes a few of their frames in huge sizes, check them out. The Sam Hillborn comes in 64cm frame, with expanded geometry.

But they ain't cheap! They'd make a wonderful gift though, and they accept payment plans (as of today!).

if your friend really does require a bike larger than 64cm (and has proportional weight) then he'll be best suited on a custom frame. If your budget is in the $1500 range, my suggestion would be to purchase a lightly used frameset and build it up accordingly.

You can find very nice ~4-8 year old custom steel frames by the likes of Bruce Gordon, Waterford, etc. for about $500.