Forwarded from a friend. She wasn't able to do enough to stop him, but did get a photo of a man stealing a bike across from 165 N Canal.

Apparently, he took the tire off the bike that was locked via ulock to a pole, put a new one on and rode away. 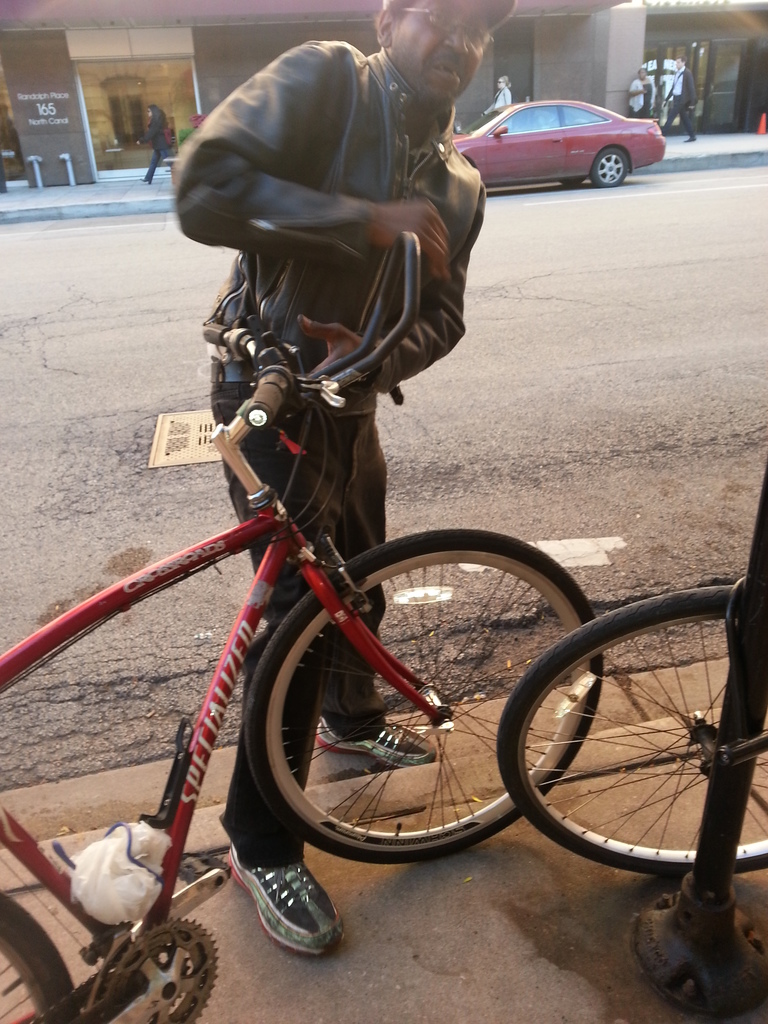 Sorry if # 4 was ugly or presumptuous. I'm just tired of the non constructive discussions and honestly don't have time for it.

Lol that reminds me of this tank top a friend of mine was wearing: 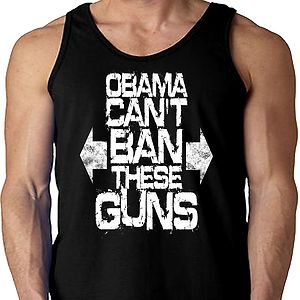 I use my right to bare arms everyday whenever it is really hot outside.

The only reason that the author can state that gun deaths are on par to surpass car deaths, is because he counts suicides, which make up more than half of gun deaths.

It's not clear to me why you think suicides aren't worth counting.

Most suicide attempts do not result in death. Many of these attempts are done in a way that makes rescue possible. Many overdoses, poisonings, and even wrist slashing are often a cry for help. The attempts that are made with a gun, however, are determined. They are not a cry for help. What suggests that a determined suicidal who is deprived of a gun won't find an alternative? Remember, they aren't asking for help, they intend to kill themselves. Are we going to eliminate bikes so that people can't kill themselves by riding in traffic?

Here's the thing about gun control: we've tried it for generations and it has not succeeded. Yeah, England this and Canada that and Moldova something else - it hasn't worked here. Removing the guns has proven to be impossible and there is nothing - nothing - to suggest that anything we can do is going to change that. Criminals are armed and don't give a flying burrito what ineffective feel-good laws we pass in an effort to disarm them. All we have succeeded in doing is disarming the otherwise law-abiding people - it's time for the gun control supporters to admit it didn't work and let's move on.

The only reason that the author can state that gun deaths are on par to surpass car deaths, is because he counts suicides, which make up more than half of gun deaths.

It's not clear to me why you think suicides aren't worth counting.

Here's the thing about gun control: we've tried it for generations and it has not succeeded.

It's not clear to me that much, if anything has actually been tried. We do all sorts of things to try and insure that driving cars is safe, including user education, licensing and engineering them to improve safety. We do little, if any, of that for guns.

As to the point Mark made about cars being statistically more dangerous than guns, I'm guessing you may have noticed that they are used quite a bit more as well. I'll accept for the moment your belief that suicides don't count because we can perfect our mental health system (yeah, right), and will work with your assertion that there are three times as many traffic deaths as gun deaths. It's probably difficult to make an apples-to-apples comparison about "hours of use," but I will wager dollars to donuts that the time of use of cars in this country is orders of magnitude greater than the time of use of guns.  Most adults drive, safely, to work and back every day. Most guns, on the other hand, are rarely used. It's likely that many fewer total hours of gun use contribute to the gun deaths in this country than the total hours of use of cars required to kill the three times as many people as you assert die as traffic fatalities.

Also, consider that while the number of cars per capita and guns per capita are roughly the same, the distribution of the two across the population is almost certainly quite different. There are huge segments of the population where gun ownership is almost nonexistent.  There are other segments where multiple gun ownership is common. It's likely that many fewer people and much less actual time of use are responsible for the number of gun deaths than the number of people responsible for traffic deaths.

I will close (and stop following this thread) by relating my own story. My mother committed suicide with a gun when I was 12. Technically, she died of pneumonia when I was 13, but that was because she survived in a coma for a few months. She was a gun owner, as her parents had been. She also suffered from alcoholism and depression, and had been under treatment (such as it existed in the 1960s) various times. Yet, she could, and did, function as a contributing member of society. Consequently, when people suggest that better mental health treatment alone will solve the problem, or that suicides are somehow less important than homicides, I am offended. There was a person and a gun involved in this one isolated incident. To somehow suggest that the only thing that matters is the person, and that we shouldn't try to do anything related to the gun or to the relationship of the gun and its owner (like require training and renewable licensing every now and then) is laughable.

Perhaps we can engineer better mental health treatment, but given that the people who shout the loudest in the public sphere that improving our mental health system will fix the gun death problem are some of the same people who are trying their best to insure that we don't have anything even approximating universal health care, pardon me, but I'm not holding my breath. In my mind, the mental health argument is just a canard, another diversionary tactic designed to keep from honestly considering steps that might help.

I agree and sorry to everyone for contributing to the derailment of the discussion.

I work downtown and I've now seen this guy's face enough times that I might be able to recognize him if I see him. Especially if he's carrying around a wheel. If I spot him I'm going to follow him around singing a happy song so he doesn't steal a bike! Won't get too close but make it quite obvious that I'm on to him. Then try to get a cop's attention. Let them do their job.

Also, I wish this thread was about bike thieves, I hate the gun talk. *sigh*

I was at the Walgreen's at State and Randolph and noticed their baked goods were pretty exemplary. Anyone know who supplies them?

I like pumpkin pie and pumpkin bread but the other pumpkin flavored stuff-- nah.

Next time someone sees this guy, try to distract him with pumpkin cookies and then snatch the bike back!

just please - no one, and I MEAN NO ONE! please dont shoot the cookies!!!

What about those seasonal beers? Pumpking is really quite delicious.

I like pumpkin pie and pumpkin bread but the other pumpkin flavored stuff-- nah.