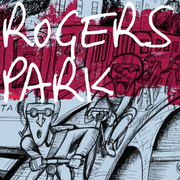 This Saturday April 21, join us for our brand new tour of Rogers Park. Perched on the northeastern corner of Chicago, Rogers Park is Community area #1 and is located 9 miles directly north of the Loop. It gets its name from its earliest non-native settler, Irish immigrant and developer Phillip Rogers who purchased about 1,600 acres of land from the government and formed the beginnings of Rogers Park.

On April 29, 1878 Rogers Park was incorporated as a village.  In 1893 it was annexed to Chicago.  All through the late part of the 19th century, the area was marketed as a suburban neighborhood but as the rail lines that passed through opened stops in Rogers Park, its popularity and population exploded and an area of large plots and single family homes was increasingly built to accommodate a large influx of renters.  The area boasts some of the city’s most exquisite mansions and single family homes in close quarters with apartment buildings from slight to epic and from simple to grandiose.

The tour will journey over 15 miles of city streets on Chicago’s far northeast side.  We will travel through a built history that features Loyola University, Chicago’s northern lake front beaches, Frank Lloyd Wright’s Emil Bach House, Henry Schlack’s St. Ignatius Church and Rectory, Arthur Hussander’s Eugene Field School, and a bevy of brilliant residential, civic and religious buildings encompassing an area as diverse in population as it is in architectural styles.  From the buildings of Chicago’s most famous architects  to the non-pedigreed worker’s homes and apartment buildings, the area is a brilliant find for fans of Chicago architecture.

RSVP for Tour of Rogers Park to add comments!

Rough plot of the ziggity-zaggity meandering that was the Rogers Park tour: http://massup.us/now/r?d=20120421

All Hail Lee and his great rides!

Kevin, the check's in the mail too right?

Kevin - unacceptable.  Cancel trip at once and return.

This sounds like a great ride, but I will be out of town.